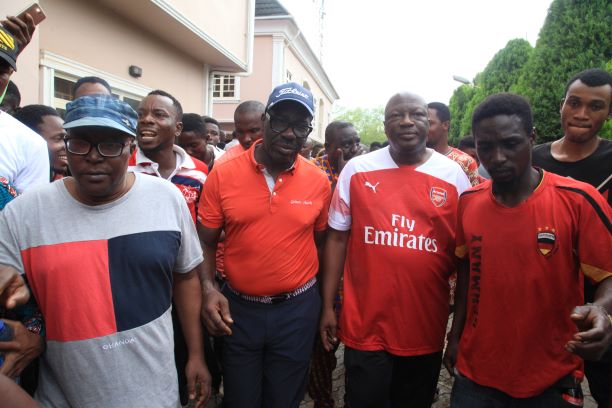 Governor Godwin Obaseki on Saturday stepped out to counter moves by loyalists of Comrade Adams Oshiomhole to displace the political leadership of his trusted Secretary to the State Government, Osarodion Ogie in one of the major Local Government Areas of the state, Ikpoba Okha.

The political currents in Ikpoba Okha, one of the Local Government Areas in the state capital, Benin-City had recently been shaken by the nomination of a trusted associate of Oshiomhole’s, Chief Victor Ekhator who is from the area as the Edo State representative into the board of the Niger Delta Development Commission, NDDC.

The nomination ostensibly masterminded by Oshiomhole, who is the national chairman of the All Progressives Congress, APC was seen as another move towards diluting the political influence of Ogie, who is a key strategist in Governor Obaseki’s camp that is now in rebellion against Oshiomhole.

On Saturday in an unprecedented development, Governor Obaseki went to Ogie’s residence in Benin to assert the political leadership of the SSG.

The visit was timed to coincide with the visit of youths from the Local Government Area who also came to pledge solidarity to their leader.

Affirming that the state chapter of the APC is intact, the governor said that God is the one who puts leaders in place and not men, despite plans of some persons to cause disunity in the party.

The governor said his administration is working with the state APC structure to make the state chapter of the party, the strongest in the country, adding that thuggery would not be allowed in the party and in the whole of Edo State.

He warned that anyone who wants to be involved in anti-party activities would be thrown out of the party.

According to him, his administration would not be distracted by the antics of some few members of the party and would continue to deliver good governance to citizens of the state.

“I am bringing jobs for the youths especially in Ologbo-axis of Ikpoba Okha. Youths should organise themselves into units and I will empower you with different skills and trainings to do the jobs we are creating. For the ongoing renovation of basic schools, youths will be in charge of the fencing work while women will be in charge of furniture,” he said.

Obaseki expressed appreciation to the people of Ikpoba Okha LGA for believing in the leadership of the SSG and for fully supporting his administration.

Ogie, who was elated by the presence of the governor and the youths in Ikpoba-Ohka at his residence, said he will continue to attract development to the area.

“Until I came into politics, Ikpoba Okha had no commissioner. I promised you that my coming into politics will change things for the better,” Ogie noted.

He said he was not perturbed by detractors who go about denting people’s image, noting that the Governor Obaseki-led administration would continue to deliver good governance to citizens of Edo State.

The APC Youth Leader in Ikpoba-Okha LGA, Mukhtar Yusuf-Osagie, said the SSG has been a good and hospitable leader since he served as Chief of Staff.

He said youths in Ikpob-Okha, where Ogie hails from, have made it a habit to always visit the SSG’s residence at weekends to appreciate his contributions to the development attracted to the council area.

He explained that there was no internal crisis within the APC in Ikpoba-Okha while stressing that non-APC members are trying to cause confusion in the party.

Hon. Princess Taiye Obanor, a leader in Ward 7, Ikpoba-Okha, commended Ogie for being a true grassroots leader, adding, “We are here to pay a solidarity visit to our leader, and we are happy to have the governor join in the celebration.”

Delta South: If We Hold Election 50 Times I Will Trash Uduaghan – Manager Laughs Off Tribunal Verdict