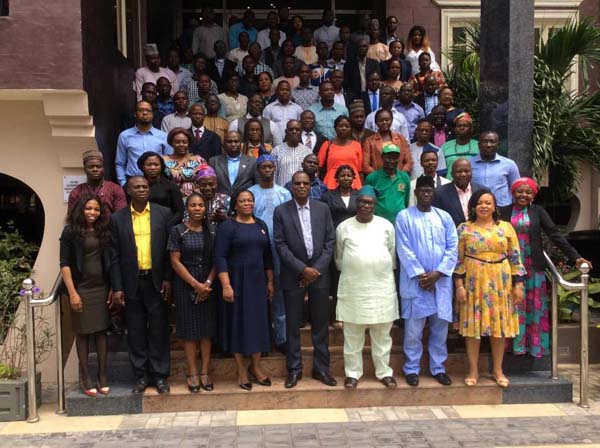 The Workshop is being organised by the Department of Climate Change in collaboration with the United Nations Development Programme (UNDP) and Lagos State Government.

The Regional Climate Change Deepening Workshop on Climate Change will hold across the six (6) geo-political zones to deepen collaboration and synergy with sub-national government on climate change issues, its impacts and possible adaptive and mitigation measures available to curb its effect.

Tarfa said the issue of climate change has become a developmental issue that affects all facets of human existence.

According to him, “Recent scientific information from the Inter-governmental Panel on Climate Change (IPCC) Assessment Reports confirms the world is on course for levels of warming that will be catastrophic for Africa.

“Further to this, there is indication that temperature rises are likely to be progressively higher in Africa with other climate related effects such as variability in precipitation patterns and the frequency of extreme weather events placing considerable pressure on livelihoods and economies across the continent; loss of food security; natural disasters; a vanishing of coastlines; human displacement; natural resources depletion;  a lack of clean and accessible water; animal migration and pest management issues; diseases and other health issues; a loss of cultural practices and traditional ways of life; economic downturns, energy crises etc.

Climate Change Specialist, Professor Emmanuel Oladipo in his presentation titled “Overview of the role of States in tackling Climate Change and reporting Obligations to the UNFCCC/Kyoto Protocol and the Paris Agreement” stated that it is critical for each state to be able to respond to the challenges of climate change.

Oladipo said climate change could stall and even reverse human development in the critical areas of Agricultural production and food security; Water stress and water insecurity; Rising sea levels and exposure to climate disasters; Ecosystems and biodiversity and Human health.

He challenged the DCC to ensure proper coordination of policy development and programmes for climate resilient development across all sectors of State’s development; Information and data management; Public awareness, education, research and science; Mobilization of climate finance and other resources including funds from the private sector, and National and international cooperation and negotiations.

Earlier, in an opening remarks, the Permanent Secretary, Federal Ministry of Environment, Mrs. Ibukun Odutose said that Climate Change has become a critical issue, both for its global importance and threats to National development.

She said: “we have the desertification process advancing southward and potential submergence of the 853 kilometers stretch of coastline along the Atlantic Ocean.

“Nigeria recognizes with great concern this threat that climate change poses to livelihoods, economic sustainability and health and the imperative to embed climate change issues within the context of its work in the country.

“Overcoming the development challenge of climate change requires that appropriate mitigation and adaptation measures are implemented in a coherent and integrative manner in which they are appropriately mainstreamed into national programs and projects for sustainable development.

“The Government of Nigeria regards the challenge of climate change as inimical to its national sustainable development that must be squarely addressed. Thus, various national efforts have been put in place at all levels of governance to promote climate resilient environmental sustainability in the context of national development.

States in the South-West are expected to present their various challenges and measures put in place to tackle debilitating effects of climate change during the two days workshop.