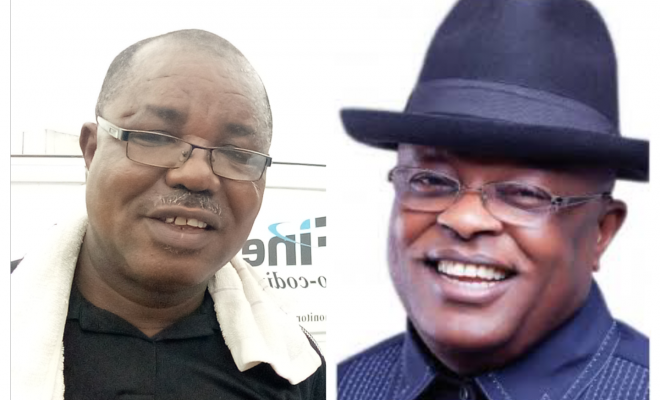 Governor David Umahi of Ebonyi on Thursday recalled the sacked commissioner of information, Mr. Ken Uhuo into his government but as a permanent secretary in the same ministry.

The announcement was made as the governor effected a second reshuffle of his second term cabinet.

Mr. Uhuo was sacked a month ago supposedly for lack of commitment to his job as commissioner.

The Secretary to the State Government, SSG, Dr. Kenneth Ugbala while announcing his sack had said:

“He has been removed for lack of commitment to the responsibilities of his office. It is a fact, that he is a quiet, good person; but he does not fit into the responsibility of the office. The State Government thank him so much and will in no time, re-screen him and find a suitable office for him,” he stated.

Sources disclosed that Uhuo did not employ fire-brigade approach in his defence of the governor after he came under attack from the Independent People Of Biafra, IPOB.

Meanwhile, in the second cabinet reshuffle of his second term cabinet made during the weekly State Executive Council meeting on Thursday, Governor Umahi, stated that Uchenna Orji, Commissioner for Human Capital Development had become the new commissioner for Information and Orientation.

“Everything takes effect immediately and I will only urge you all to fear God.”

The governor also announced the appointment of Chukwuma Ofoke, as a Special Assistant on Housing and Sharon Umahi as a member of the Abakaliki Capital Territory Development Board.

In a related development, Dr Kenneth Ugbala, Secretary to the State Government announced during the EXCO briefing that Mr Ken Uhuo, the sacked former Commissioner for Information had been reinstated as the Permanent Secretary of the ministry.

He also announced that Dr Onyebuchi Chima, the new Commissioner for Education took the slot of Ezza South Local Government Area where Uhuo hails from.

Why I Keep Nigeria’s Money With Women – Buhari