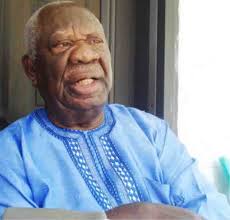 Former President Dr. Goodluck Jonathan has commiserated with Dr. Ngozi Okonjo-Iweala over the passing on of her father, Professor Chukuka Okonjo, who died at the age of 91.

In a letter of condolence to Okonjo-Iweala who was co-ordinating minister for the economy and minister of finance under his administration, Jonathan described the late professor as an excellent teacher and worthy custodian of the tradition of his people.

In the letter which the former President personally signed, hr wrote: “On behalf of my family,  I condole with you, the Okonjo family, the Ogwashi-Uku people and the  Government of Delta State on the demise of your father, Professor Chukuka Okonjo, who died at the age of 91.

“Papa was a patriot, who lived a life of service, devoted to promoting peace and reconciling the less privileged with hope.

“As an academic, he was an excellent teacher who rose to the pinnacle of his career. He was also an exemplary traditional ruler who served as a worthy custodian of the culture and tradition of his people.

“I know the death of one’s parents no matter the age is a painful experience but I want you to be consoled by the graceful footprints  and legacies of integrity, honour and selfless service that your father left behind for the rest of humanity.

“May God strengthen you and your entire family as you mourn your departed patriarch.”