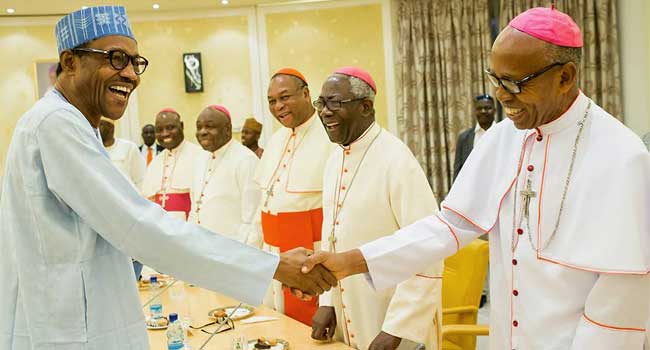 The President of the Catholic Bishops’  Conference of Nigeria, Archbishop. Dr Augustine Akubeze has charged President Muhammadu Buhari to reflect the country’s ethno-religious diversity in his appointment.

Speaking at the opening ceremony of the Catholic Bishops Confence in Abeokuta on Sunday, Archbishop Akubeze urged the administration to move from celebrating the defeat of Boko Haram to secure the lives and properties of Nigerians.

Noting what he described as  the minimalistic justifications in the appointments, Akubeze said:

“Every part of Nigeria does have competent people who are patriots and deserve to serve in very important federal positions.

“The lack of diversity by this government in the federal level should be reviewed with the aim of assuring every Nigerian that appointment to positions of importance is not based on the number of people who voted for you from those areas.

“Nigerians reject a minimalistic approach to this issues.

“We have heard the government says it has fulfilled  the constitutional requirements of appointments, At least a minister from each state. This is a minimalistic approach that does not fulfil the spirit of total integration of every Nigerian.

” All federal agencies should have directors and staff that reflect the diversity in our land, no federal agency should be dominated by one ethnic group or one religious group.”

While urging the administration to move from celebrating the defeat of Boko Haram to protecting the lives of Nigerians, he said:

“Nigerians do not want to have a debate on the meaning of the word ‘defeated’ we are just interested in living our lives peacefully without any fear of being kidnapped for ransom or being driven from our home land.

“We just want to live and care for our families, we want to be able to move freely in the country . Every government that fails to protect the constitutional right of her citizens has failed.

“If the leaders of a country can not ensure peace and security they have no business using tax payers money to provide security for themselves and their  families while the rest of Nigerians are dying daily.”