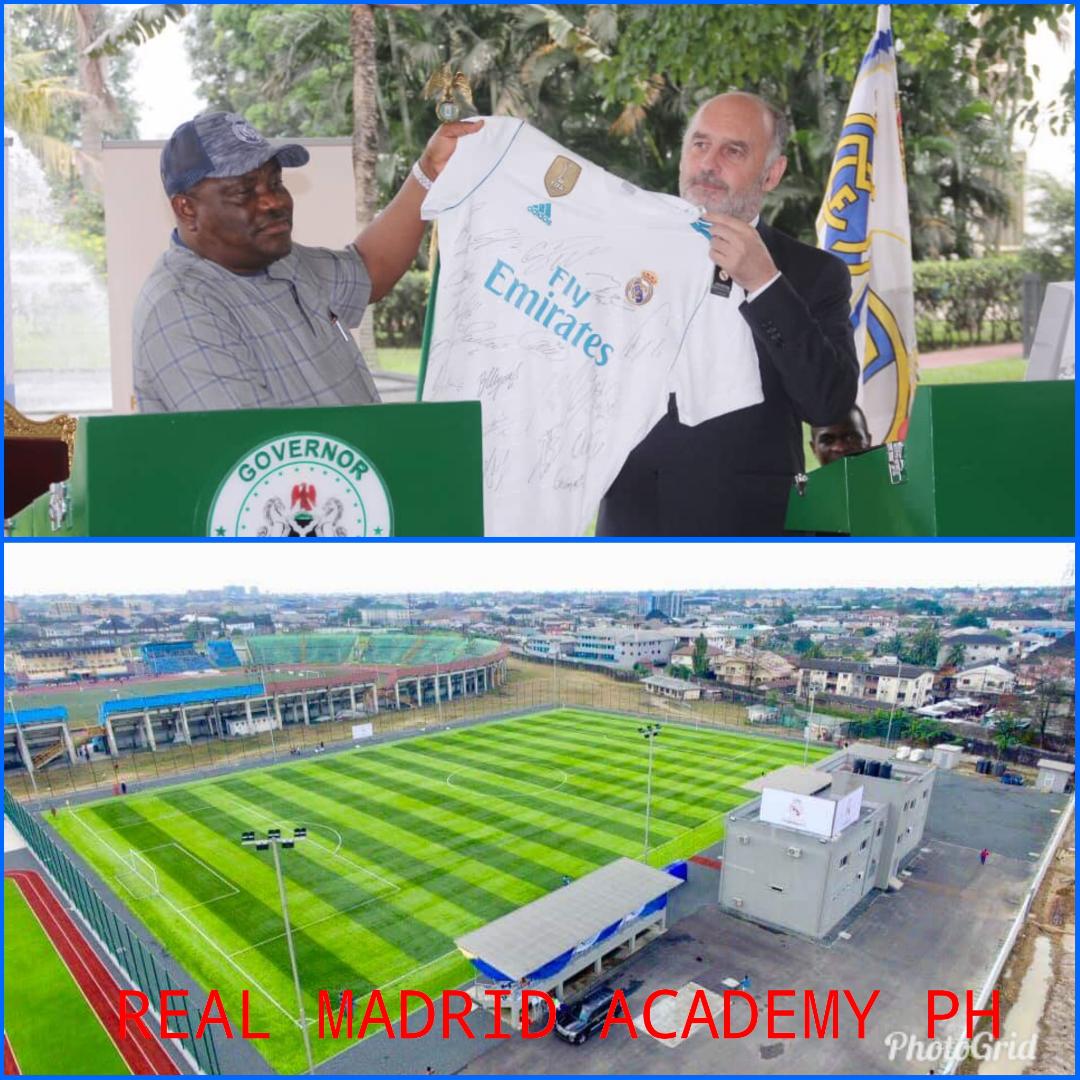 Over the years, football  has grown to be a major business platform that regenerates communities, states and countries. It is an avenue for youths in poor communities  to escape poverty  and become major contributors to the economies of their respective  countries.

From Brazil to Spain, Argentina to Britain, Nigeria to Ecuador, Ghana to Netherlands, Cameroun to Germany, proficiency  in football has transformed the lives of hitherto extremely  poor kids.

To ignore the influence  of football  in Modern Economy is tantamount  to denying a large percentage of naturally  endowed children access to wealth.

During his campaigns ahead of the 2015 Governorship Election  in Rivers State, Governor Wike stated that he will use sport as a means of empowerment  for youths.

The New Rivers Development Blueprint  upon which Governor Wike was elected declared on Page 18: “Besides enhancing good health and productivity, sports is also a great profession for youth with talents, as well as mechanism for empowerment “.

Since assuming the reins of leadership  in Rivers State, Governor Wike has taken steps to reposition  the sports sector for the good of the state.

Sharks and Dolphin Football Clubs were merged to form Rivers United. This was to give Rivers State  a required  competitive advantage in the nation’s football  arena. Rivers United won a continental ticket after the merger.

The Diete-Spiff Civic has been remodelled for the revival of different sports, while Rivers State will play host to the African Wrestling Championship in February, 2018.

The State has in the last two years played host to major sporting events.

The decision to set up a Real Madrid Academy in Rivers State is a well considered strategy  to drive football  development in the state and harness the benefits of already available talents.

It was on this premise that the Rivers State Government initiated engagement with Interact Sports and Real Madrid Foundation to actualize the dream of a Real Madrid Academy in the state.

Officials of Interact Sports and Real Madrid Foundation visited Rivers State on September 20, 2017. They met with Governor Wike and officials of the Rivers State Ministry of Sports for the preliminary process for the establishment of the Academy.

That meeting produced initial agreement on the location, facilities, affiliation and personnel that will run the Academy.

The partners then invited Governor Wike over to Madrid for the concluding talks for the setting up of a Real Madrid Academy in Rivers State.

The trip to Madrid afforded Governor Wike the first hand opportunity to deliberate with officials of the Real Madrid Foundation and Real Madrid on the different models that can be established in the state.

The governor was led on a guided tour of Real Madrid Training Facilities, had interactions  with administrative officials and technical personnel to formalize the processes for the setting up of the Academy.

On Tuesday, October 17, 2017, the process for the setting up of the Real Madrid Football Academy reached its highpoint.

Governor Wike and top officials of the Real Madrid Foundation met at the Santiago Bernabeu.

The meeting drew out the implementation framework, strategies, requirements  and timelines for the establishment  of the Real Madrid Academy in Rivers State.

In an interview after the meeting, Governor Wike said that the deliberation went on satisfactorily, noting that the partnership has reached its highpoint.

The governor said that the Academy will help the state harness the opportunities  inherent in football as it wiĺl empower the upcoming  generation.

He said: “This is the concluding part of the process of establishing  a Real Madrid Academy in Rivers State.  It is our dream to empower our youths through football.

“Today, you know that football is  big business and one of the ways to improve the economy.

“This meeting is the height of our deliberation to get the Academy Started. We are happy that this has gone on satisfactorily.  Rivers youths will reap the benefits of the Academy “.

International Area Manager of Real Madrid Foundation , Rosa Roncal Gimenez lauded the governor for the initiative to set up a Real Madrid Academy in Rivers State.

Now that it has been established, the Real Madrid Academy in the state  will develop the full potential of Rivers Youths as world class footballers, who will be productive agents in the state’s  economy.

The setting up of a Real Madrid Academy is a state development project  that will place Rivers State on the international football stage.

Governor Wike through this initiative has brought to the doorsteps  of Rivers Youths an Academy that will transform their fortune, expose them to the fundamentals  of professionalism, discipline  and develop their future.

This is a commendable move that is way beyond politics.  It is an initiative that will stand the test of time and attract economic growth to Rivers State.  Therefore, it should be supported by well-meaning Rivers people.

From an idea, the Real Madrid Academy has metamorphosed into a reality.  It is a long term vision  that will transform  the sporting landscape of Nigeria and the world.

Right from day one,  when the CAF President,  Ahmad Ahmad laid the foundation on May 28, 2018 in the presence of the International Football Community and the International Sporting Press, the Academy has gained global attention.

With the facility now officially available,  the process for the grooming of football stars is now fully underway.  The first set of students,  players of Banham Model Primary School,  Port Harcourt have been admitted.  These winners of Channels Television Kids Cup were honoured for making Rivers proud.

“When we promised that we will set up  a Real Madrid Football Academy that will help groom  International Stars in the area of football,  so many people  played politics and said that it was  fake.

“We are happy  that it has come to fruition.  We have sent people  to Madrid and they have  been trained as instructors and coaches.  We also sent the players of Banham Model Primary School, winners of Channels Television Kids Cup to Madrid for training.  They will form the first set of students “, Governor Wike said.