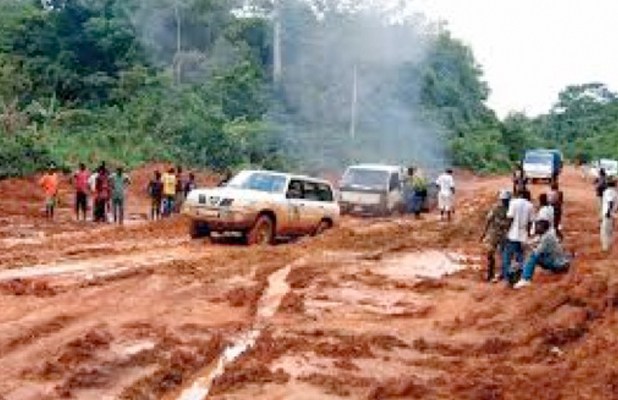 Commuters and motorists in the South-East have expressed worry over the dilapidation of most federal roads in the area, saying that the situation has made vehicular movement cumberer some and more expensive.

In a survey conducted by the News Agency of Nigeria in the zone, the people blamed the deplorable condition of the federal roads on poor handling, substandard job and poor maintenance culture by successive governments in the country.

They, therefore, called on the Federal Government to declare a state of emergency on the roads to alleviate their plight and also save lives and property of the people

In Anambra, the Commissioner for Works, Marcel Ifejiofor, said that because of the poor state of the roads, motorists resorted to diverting to state roads, hence bringing a lot of pressure on the roads.

Marcel said that the state had written to the Minister of Works on the matter and that plans were on to put barricades on some of the state roads to bar heavy duty trucks and articulated vehicles from plying them and causing more damage.

He said: “Every road is designed for a particular load measure and allowing heavy duty vehicles to damage the state roads would have negative impact on the state economy.

“In spite of heavy rainfalls being experienced in the area, government is not relenting in making the roads passable.

“We have 188 active road projects and we are doing palliative work on some strategic roads to ease the sufferings of road users pending the end of the rainy season.”

Also, the Controller, Federal Ministry of Works in the state, Adeyemo Ajani, said that his office was aware of the deplorable state of most federal roads in the state.

“We have communicated this to the Minister of Works and Housing and he has directed that we forward proposals to his office on the state of the roads.

Ajani said: “As we speak, approval has been given for the rehabilitation of seven federal roads in Anambra and once the rains are over, work will commence on the roads.”

He said that remedial work was ongoing on the Onitsha-Enugu Expressway to ease the burden of motorists traveling to either Asaba, Owerri or Port Harcourt Airport after the closure of Enugu Airport.

Ajani, who appealed to road users to be patient, gave an assurance that measures were in top gear to address the deplorable state of federal roads in the area.

Cosmas Ikechukwu, a commercial bus operator on the Awka-Ekwulobia-Owerri route, said the bad state of the road deteriorated with the rains.

In Enugu state, commuters expressed concern over the deplorable condition of some of the federal roads which, they said, have made life unbearable for them.

Harrison Ogbu said that while some portions of the Enugu-Port Harcourt Expressway had been rehabilitated, a lot more work needed to be done.

Ogbu regretted that the federal government had yet to complete rehabilitation works on the road which, according to him, serves as a gateway to all the states in the South-east.

He said that work seemed to have been stalled on the roads, following the withdrawal of contractors from site.

A motorist, Ben Nnamani, said that the Enugu section of the Enugu–Onitsha Expressway had become a death trap.

Nnamani described the Abakpa Junction/9th Mile section of the road as one of the worst dilapidations.

He said that many fatal accidents had been recorded in the area, especially the Ugwu Onyeama axis of the road, with loss of many lives and property.

NAN reports that the 9th Mile–Nsukka section of the Enugu–Markudi highway had remained impassable in the last 10 years.

It would be recalled that the Minister of Works and Housing, Mr Raji Fashola had during a tour of the federal roads in the zone in May 2018, said that the Federal Government would re-award the Abakpa–9th Mile section of the Enugu–Onitsha Expressway, following allegations that the contractor handling the road absconded.

Meanwhile, the Federal Controller of Works in the state, Femi Oyekanmi, who was said to be on leave, could not be reached to comment on the issue.

Conversely, road users in Ebonyi said that federal roads in the state were in good condition.

A cross-section of the people, who spoke on the condition of the roads, commended the state government for its periodic interventions on the roads.

The respondents said that the roads, including the Abakaliki-Enugu Road and Abakaliki-Afikpo federal highway, were hitherto in deplorable condition.

An official of the state Ministry of Works and Transport, who spoke on the condition of anonymity, said that the state government rehabilitated the entire Abakaliki-Afikpo Road and as well as the Abakaliki end of the Abakaliki-Enugu Road.