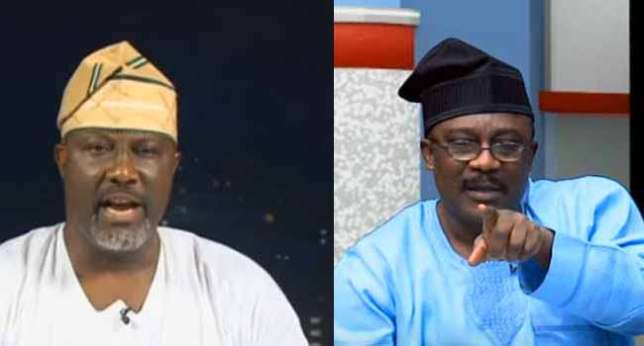 The Court of Appeal in Abuja on Tuesday reserved judgment in three separate appeals filed by Senator Dino Melaye challenging his election victory that was quashed in August by the National Assembly Elections Petitions Tribunal.

The three appeals were filed by the Peoples Democratic Party and Melaye, praying the appellate court to set aside the majority decision of the tribunal, which voided the election of Melaye for Kogi West Senatorial District.

Justice Abubakar Datti Yahaya, who presided over the three appeals, announced that a date for judgment delivery would be communicated to parties as soon as it is fixed.

The PDP, represented by Jubrin Okutepa (SAN), in his final argument prayed the Appeal Court to set aside the majority decision of the tribunal against Melaye on the ground of denial of fair hearing and refusal to evaluate evidence adduced during the hearing.

The party claimed that the tribunal failed to evaluate the testimonies of its witnesses while no reference was made to all the documentary evidence it supplied before the tribunal came to a wrong conclusion of over voting, even when the petitioner did not tender voter register.

The PDP further claimed that the tribunal turned the head of natural justice upside down when it based over voting used in cancelling the senatorial election on the number of collected permanent voter cards rather than voter register as required by law.

The PDP therefore urged the three-man panel justices to invoke section 16 of the Court of Appeal Act and dismiss the petition for lacking in merit.

In the second appeal filed by the Independent National Electoral Commission, through its lawyer, Kola Olowookere, the Appeal Court was urged to dismiss the allegation of mutilation of election result and favouring a particular candidate as alleged by the petitioner, Senator Smart Adeyemi, and the All Progressives Congress.

The electoral body argued that finding of over voting by the tribunal was wrong and baseless because the voter register and result of election in 2015 tallied with the result in the disputed area.

INEC alleged that the tribunal did not evaluate the exhibits it tendered to prove that there was no over voting and pleaded that appeal be allowed.

The third appeal filed by Dino Melaye and argued by Dr. Onyechi Ikpeazu (SAN), urged the Appeal Court to set aside the over voting decision of the tribunal because it was based on hearsay instead of polling units agents’ results

The senior counsel drew the attention of the Justices to the fact that only three witnesses were called, adding that the evidence of the three witnesses based on hearsay cannot justify the cancellation of the senatorial election.

Melaye’s counsel further submitted that mutilation of result sheet was untenable because the final result of the senatorial election was endorsed by agents of the candidates and the parties, and that the petitioners failed to establish that the alleged mutilated result substantially affected the final result collation.

However, Adeyemi and the APC opposed the arguments of the appellants and pleaded with the appellate court to dismiss the three appeals because appellants were not denied fair hearing and that the tribunal based its findings on over voting on the report of INEC which comprehensively contained the number of collected voter cards unit by unit.

Adeyemi and APC through their counsel, Adekunle Otitoju, argued that INEC breached an order of the Federal High Court to the effect that the senatorial election result must be collated and announced in Kabba, the senatorial district headquarters, and not in Lokoja as done by the electoral body.

They alleged that while their agents were in Kabba waiting for the collation, the INEC officials and agents of the appellants allegedly colluded and secretly moved the result collation to Lokoja where the result sheets were allegedly mutilated to favour Melaye.

They also insisted that mutilation of results, dated February 25 instead of February 23, was so apparent and that over voting was so established to the tune of over 48,000 votes.

They therefore urged the court to dismiss the appeals and uphold the majority decision of the tribunal.