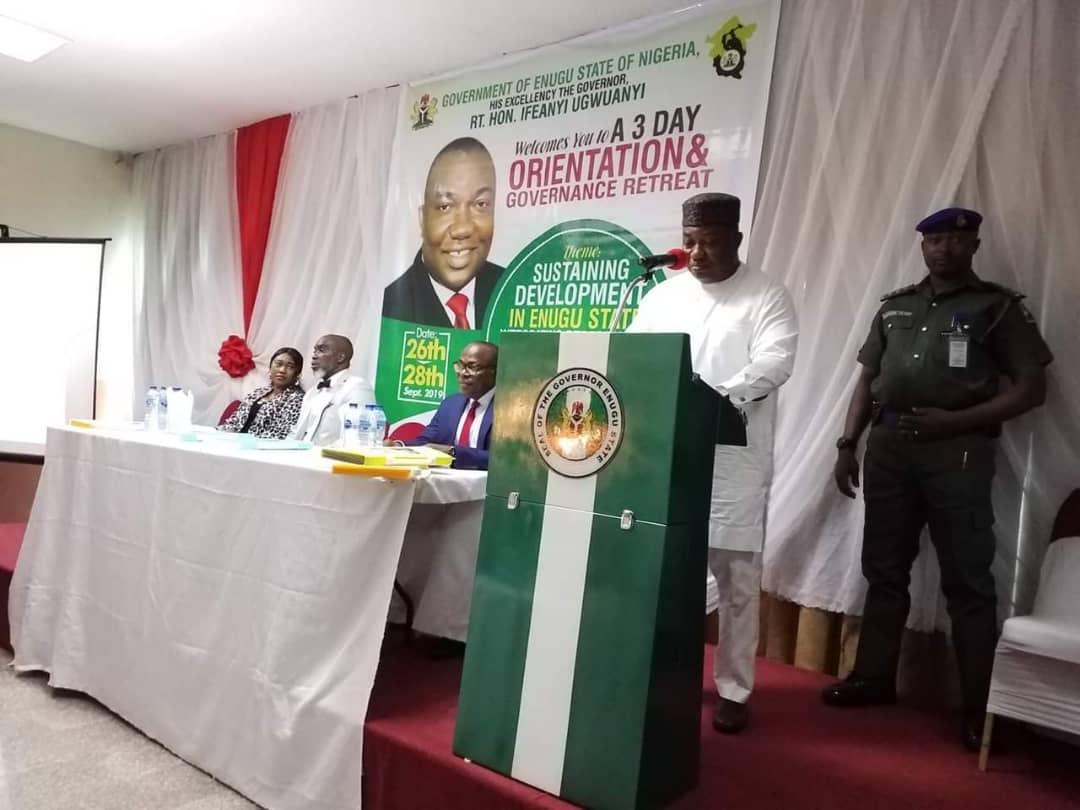 Governor Ifeanyi Ugwuanyi of Enugu State, has charged his newly appointed commissioners and Advisers, to hit the ground running and raise their performance bar towards the full actualization of the state government’s policies and programmes.

Gov. Ugwuanyi, who reiterated his administration’s commitment to continue to advance good governance in the state through honest, accountable governance and optimal service delivery, also charged the new appointees to “at all times show this sensitivity in the conduct of government business”.

The governor disclosed that the essence of the retreat was to share the policy directions of his administration, facilitate the appointees’ understanding of governance processes, secure their buy-in and build consensus on the state government’s mission to continue to alleviate the sufferings of the people, saying: “Ndi Enugu expect nothing less from us”.

Declaring that “the season of politics is over”, Gov. Ugwuanyi noted that “under my watch, the governance mode is fully activated” and “our oath of office is to serve to the best of our ability and give fair and equitable treatment to all manner of persons irrespective of one’s partisan interests, fashions and propensities. Therefore, this administration will not tolerate undue politicking”.

The governor, who re-emphasized his administration’s sense of urgency to deliver on its mandate within a short time, disclosed that it has assembled very competent resource persons who are well schooled in public sector management and governance issues to facilitate the policy and governance dialogue.

According to him, “you will be assigned portfolios at the close of the retreat and thereafter we expect you to hit the ground running while fully utilizing the sectoral ad-hoc committees’ overarching and sector-specific recommendations which constitute our strategic architecture for transformative governance.

“I recognize the inalienable rights of individuals to avail themselves the political process, but persons who are so inspired will have an opportunity to step aside and further their aspiration by half-time of this tenure during which we will inevitably reshuffle and rejig our administration. It is therefore my expectation that you will be guided appropriately.

“I enjoin you to maximize the benefits of this retreat by fully applying yourselves to the tasks ahead. I charge all of you to work as a team and to complement rather than compete with one another.

“I thank the team led by Prof. Chidi Onyia and other resource persons from our foremost Development Partner, UK-DFID, for their abiding support and solidarity”.