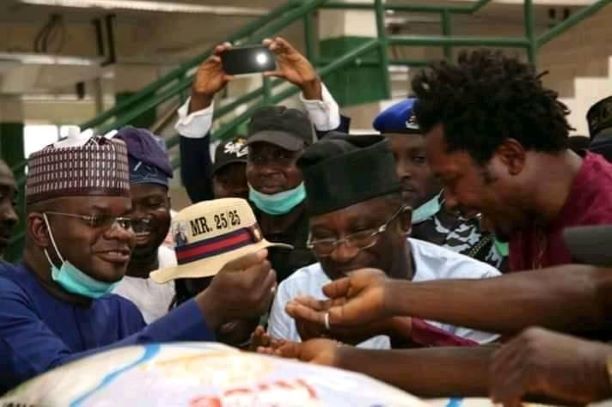 Tanimyu, a Lokoja-based businessman and chieftain of All Progressives Congress (APC), gave the commendation while speaking against the backdrop of the recent inspection of the over four billion naira Rice Mill solely constructed by the Bello-led government of Kogi State.

He described the project as laudable and remarkable, noting that it served as an evidence of Bello’s determination to reposition Kogi State for greater heights in the interest of the people.

The APC chieftain, who was with the governor during the inspection of the Rice Mill sited at Omi Dam in Ejiba, Yagba West Local Government Area, LGA, within the western senatorial district of the state, said: “The newly constructed N4 billion worth rice mill factory by the Governor Yahaya Bello-led Kogi State Government, which has the capacity to produce over 1000 bags of 50kg of high quality rice per day and could employ over 5000 persons in direct jobs and engage additional people in indirect employment, is a clear indication of Governor Bello’s strong commitment to building a better Kogi for all. It is a very outstanding and significant project capable of turning around the fortunes of Kogi State.

“As revealed by our performing governor, this is a project that will inject over N300 million every month into the economy of Kogi State and further boost the monthly IGR of the state with over N120 million. The Omi Dam in the rice mill has about 600 fish ponds from where fish and poultry meals will also be produced. The governor has demonstrated that he means well for Kogi State and he is leaving no stone unturned to transform the agricultural sector to create jobs for our people.”

He added that “With the various programmes and projects he has embarked upon in the area of agriculture, no doubt, it can be evidently seen that Bello is working assiduously to keep to his promise to make agriculture a business concern and ensure that Kogi State becomes one of the agricultural hub of the country. Look at the setting up of the mass cassava production and Ethanol processing company.

“The bio ethanol plant would generate about $80 million annually and create jobs for over 200,000 youths. The Kogi State government last year signed an MoU with the NNPC to build a bio fuel refinery in Kogi. This will create jobs for over two million Nigerians and greatly reduce unemployment. Bello’s various interventions paved way for the availability of fertilizer, seedlings and other agricultural inputs to famers at reduced prices, thereby enhancing the production capacity of farmers in the state. Even the world bank team seeing what is on ground when they visited Kogi State in June this year applauded Bello’s initiatives in the area of agricultural development.”

Tiamiyu therefore called on all Kogites to embrace the re-election bid of Governor Bello “to enable him continue with the good work he is doing to transform Kogi State through agriculture and other developmental strides. The return of Bello for a second term will surely open the state for further progress, growth and advancement.”

APC’s Vow To Take Bayelsa Is No Joke – Sylva

INEC Raises Controversy With Disqualification Of 14 Candidates In Kogi, Bayelsa