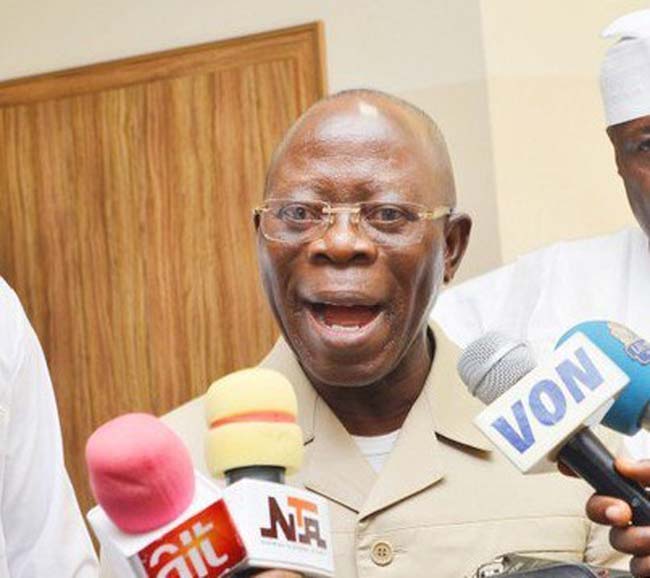 All Progressives Congress, APC national chairman, Comrade Adams Oshiomhole on Thursday hit at Governor Serikae Dickson of Bayesla State describing him as lacking self-confidence in his desperation to foist a successor.

Speaking with stakeholders from the state, Oshiomhole vowed that the APC would not join Dickson in using foul language which he said inevitably reduced the prestige of the office of governor.

He said; “Let me use this opportunity to reply directly to my Friend, Gov. Dickson of Bayelsa. I think he has allowed his fears, lack of self confidence, his imminent defeat that await him and his party to over cloud his judgement as to resort to the use of inelegant language and uncouth statement to describe one of his own and a fellow citizen of Bayelsa. When a governor describes one of his own purely on account of his political differences, using name of terrorists and such, then he has missed it already.

“So APC rejects and condemns in strong terms the raw language unbecoming of a governor, by a man I otherwise admired, the way he has described our candidate. We will not come to his own level. On this occasion, we will invoke a popular statement made by Michelle Obama at the peak of the last presidential election in US when she said ‘when they go low, we fly high’. So when Dickson goes low, we will fly high. We will not join him in using gutter language to describe neither his office nor his person, or even their candidate who is about to be defeated”.

Oshiomhole also added that the APC has a better candidate, saying the quality of its candidate makes Gov. Dickson jittery.

“We recognize he has a right to be selected by his party, we believe our candidate is better than his candidate and we believe he will provide, better, popular-driven, people-oriented governance, not elitist governance for the people of Bayelsa state.

“Let me assure him, we will not go low as he has chosen to go but we will rather go high and higher until he packs out of Government House and hands over decently like a gentleman to our candidate, by the special grace of God, the next governor of Bayelsa state, David Lyon”, he added.

Kogi: PDP Does Not Have A Candidate – Senator Adeyemi