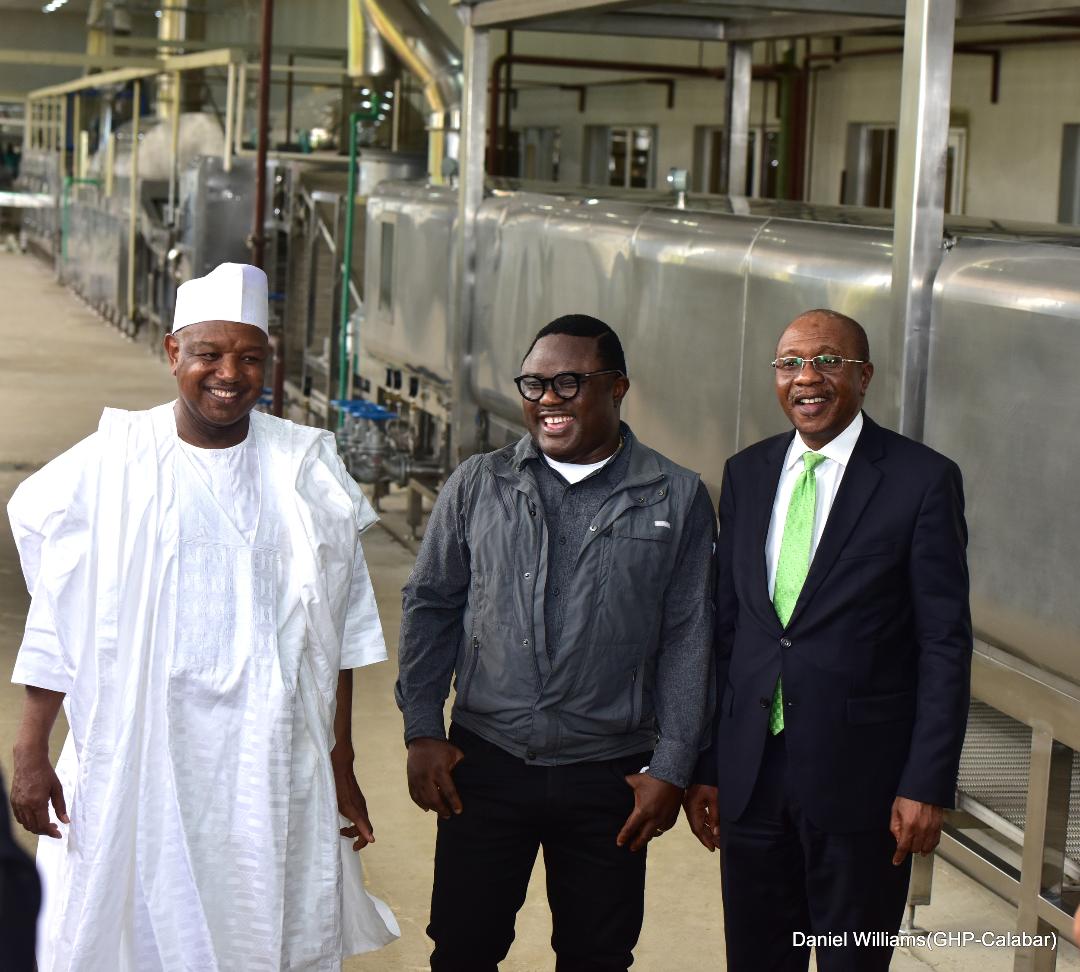 Governor Ben Ayade of Cross River State has been commended by his Kebbi State counterpart, Alhaji Atiku Bagudu and the Central Bank of Nigeria (CBN) governor, Godwin Emefiele for industrializing the agricultural sub-sector of the state.

The duo urged other states to take a cue from Ayade’s agro-industrial projects, which they noted, have huge potentials to impact on the living standards of the people of the state in particular and the Nigerian economy in general.

Emefiele who gave the charge in Calabar, weekend, during their visit to the Ayade industrial park, said the visit was aimed at “developing areas of cooperation between the state and the Central Bank of Nigeria.”

The CBN Governor, accompanied on the visit by the Kebbi State governor who also doubles as the vice chairman of the National Food Security Council, expressed his excitement at the several agro-allied industries at the Ayade Industrial Park.

“I am particularly excited because Cross River has a unique appeal to me as it is renowned for its agricultural endowment as well as its tourism opportunities and potentials in Nigeria.”

Continuing, Emefiele said: “I salute His Excellency, Prof Ben Ayade for creating the enabling environment for agriculture to thrive and sinking himself into the revolution and development of the economy of Cross River because he has worked so hard to make this visit a reality today.”

The CBN Governor maintained that “the fact that agriculture is an important economic activity for majority of Cross River indigenes is exciting as it touches on the very core of the CBN agenda for development, finance as well as President Muhammadu Buhari’s agenda on food security where he said that we as a country must grow what we eat and eat what we grow.”

Emefiele said his presence in the state was a demonstration of CBN’s preparedness to partner not only with the state government but also the good people of Cross River who are desirous to embrace agriculture as a business.

According to him, “we have visited about five different projects within this park but I also recall that almost about two and a half years ago when we visited Cross River with Governor Atiku Bagudu, we drove some kilometres out of Calabar and we saw tremendous development of rice plantations. I understand today that Governor Ayade is building the biggest rice mill in the southern part of Nigeria. I congratulate you Governor Ayade on this brilliant initiative.”

On his part, the Kebbi State Governor, Bagudu described the agro-industrial projects of the state as capable of exporting agricultural items that will not only create employment but boost the economy of Cross River and the nation at large.”

In his remarks, Ayade lauded Emefiele and his Kebbi counterpart for their kind words on his style of governance and for encouraging the people of the state not to take their hands off the plough. To the CBN Governor, Ayade said: “Nigerians know you for your consistency, commitment and focus in diversifying the economy of this country.