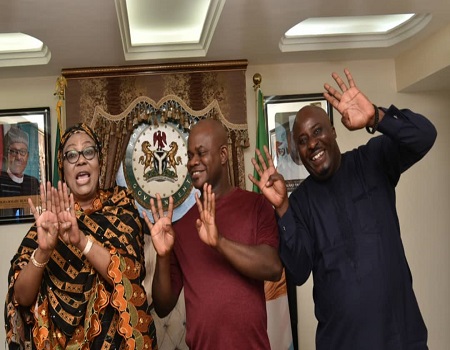 A Peoples Democratic Party Governorship aspirant, Hajiya Halima Alfa has turned her back on her party’s governorship candidate, Engr. Musa Wada and has declared her support for Governor Yahaya Bello in the November governorship poll.

The backing is of great importance to the governor in the East Senatorial District where Alfa has her base. It also diminishes Wada’s claim to have locked up the Igala vote ahead of the election.

Hajiya Halima who is an astute politician disclosed this during her visit to Governor Bello on Tuesday in Abuja at the governor’s residence.

A former governorship and Kogi East Senatorial candidate in the last general election, Hajia Halima said her decision to back the Governor followed due consultation with her supporters and other political associates, noting that it was also the right thing to do given the efforts of Governor Bello to improve the socio-economic wellbeing of Kogi citizens since his assumption of office.

The former Director of SURE – P and astute politician disclosed that the coming of Governor Yahaya Bello was divine, noting that he has done well despite the prevailing financial and political litigations he has faced.

She said the Governor has done well in uniting the state across religious and ethnic lines, stating that the governor has also improved security architecture in the state.

Hajia Halima said the state needed leadership and political stability which it lacked in the past and the Governor is currently providing such qualities.

On Igala agenda, Hajia Halima described the idea as old-fashioned, stating that leadership has nothing to do with any tribal or ethnic agenda but the quality of leadership anyone can provide. He said Ankpa-Okpo express junction road which were abandoned by previous governments was fixed by the incumbent governor who is not Igala.

She also mentioned various projects and programmes of Governor Yahaya Bello in Kogi East to include the provision of water, Umomi-Ugwolawo-Ajaka-Idah road, Ibana-Okpo-Ogugu-Ette Road amongst others.

She urged Igala people to embrace developmental agenda and jettison the so-called Igala agenda which in real sense was nothing but family agenda and urged all her supporters to key behind the candidature of Governor Yahaya Bello to ensure his victory on the 16th November.

Why CCB Should Charge Diri For Violation Of Assets Declaration Law