Edo Is Safe Because Oshiomhole's People Have Relocated To Abuja - Obaseki

Why Obaseki Couldn't Have Paid For PDP Ticket -Orbih

How OBJ Pushed My Re-Election In ACN - Uzamere 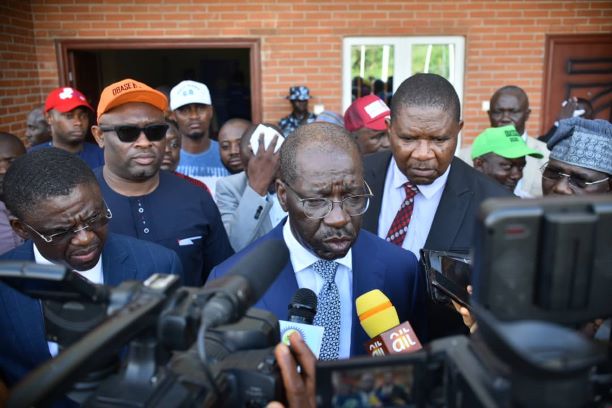 Governor Godwin Obaseki of Edo State has asked the public to disregard the claims of the Adams Oshiomhole aligned factional chairman of the All Progressives Congress, APC Col. David Imuse as to the security situation in the state.

Debunking claims of insecurity and the importation of thugs by the governor, Obaseki said that Edo State is safe presently because Imuse and his allies had chosen to relocate to Abuja because the treasury was not opened to them.

Speaking through his spokesperson, Crusoe Osagie, he said:

“Edo State is safe and peaceful because all the thugs, including Rtd. Col. David Imuse, have migrated to Abuja.

“The comments to the contrary credited to the Chairman of the Edo People’s Movement (EPM), Col David Imuse is unfortunate.

“It is just as the bible says that “the wicked man runs when no man is pursuing him.”

“These are people who claim to be in majority in both our party the All Progressives Congress (APC) and the state, but they are in hiding in Abuja.

“Edo people know them for who they are: disgruntled gluttons, who are aggrieved because the Obaseki administration has refused to open the treasury for them to loot. They should be ignored absolutely.”