Jonathan Replies Lamido: How Not To Be A Patriot And A Good Party Man

Falana: President's Children Are Not Authorised To Use Presidential Jets 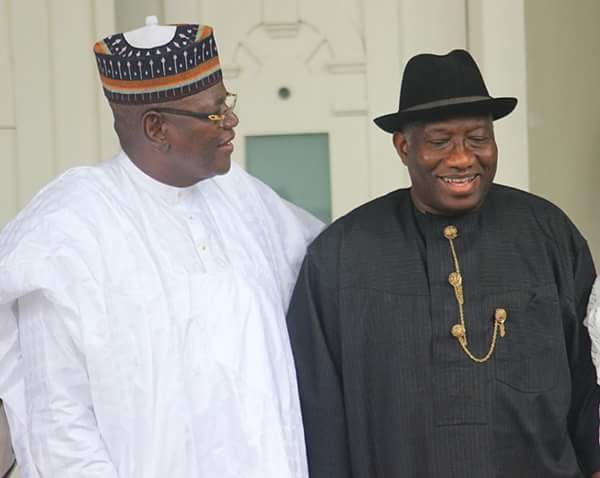 Our attention has been drawn to a Sunday Sun publication of October 25, 2019 in which Alhaji Sule Lamido claimed that former President Dr. Goodluck Jonathan traded off the Bayelsa elections in order to escape being investigated over the controversial Malabu oil deal. In an interview granted the newspaper, Lamido was quoted to have said: “The leadership of the APC and the government are blackmailing Jonathan and I think I can say it anywhere that he traded this for his own freedom.”

Ordinarily we shouldn’t be responding to an interview of this nature because it is obvious that given his amiable nature, former President Jonathan does not consider the idea of joining issues with individuals on the pages of newspapers a decent conduct. We are also well aware of the former President’s belief that truth always has a way of catching up with statements rooted in lies and propaganda, such as this one. Furthermore, we considered that when former President Jonathan was in office Mr. Lamido was one of the governors that worked closely with him.

However, we chose to make this clarification just to set the record straight, especially as a number of the former President’s close associates have been asking questions about the blatant statement credited to Mr. Lamido.

We really do not know why Mr. Lamido, chose to speak like he did, especially with such hostility, contempt and lies against former President Jonathan. However, one thing is clear: In his anger and apparent bile-filled disposition, Mr. Lamido, an otherwise astute and erudite politician, obviously dropped the ball by electing not to speak responsibly like a statesman. He actually came off the interview sounding like a sulking skunk, to whom logic or reason meant nothing. It didn’t matter to him that, as a well respected member of the society, he shouldn’t make such weighty claims against a former President if he was only guessing, like he admitted. Hear him: “And the issue of Malabo, I think, played a key role.” So hugely pathetic!

Apparently seized by some inexplicable resentment, Lamido held on to the lie currently being pushed by few mischief-makers to the effect that former President Jonathan helped the All Progressive Congress (APC) to win the last gubernatorial election in Bayelsa State.  Unfortunately, the former Governor jumped into this convenient bandwagon of grovellers without first thinking of the burden of substantiating his claim. What to do? Orchestrate a raft of incongruent drivel of cheap lies to confuse the readers. In one breathe, Lamido alleged that Jonathan worked against his party “because he was very, very angry with (Governor) Dickson,” in another he claimed that it was “because he (Jonathan) sure knows his problem with Buhari and his government. And the issue of Malabu, I think, played a key role.”

Where was Lamido and his ‘Malabu problem’ when Jonathan campaigned vigorously and helped PDP to win Bayelsa governorship election in 2015, under the same President Buhari?

It is important to establish at this point that Mr. Lamido probably knows very little about the Malabu case, for which he was not supposed to have commented blindly. In the first place, the Malabu oil block was not given out by Jonathan. It was a deal that was sealed during the time of late head of state, Gen. Sani Abacha. We feel that Mr. Lamido is in a position to know that the business of oil exploration has an international dimension, as such, it is clear that it is not only the Nigerian Government that is looking into the Malabu case. If that is the case, he should also have known that there are atleast three other countries outside Africa that are investigating the matter. Assuming without conceding that the former President Jonathan is culpable as Lamido alleged, would a trade off deal with the Nigerian Government also free him from blame in other countries like Italy, United Kingdom and the United States?

His Excellency Goodluck Jonathan is convinced that Mr. Lamido’s awkward intervention in this matter was deliberately designed as a form of blackmail. Having tried many other ways to discredit the former President to no avail, Mr. Lamido is now scheming to project Malabo as Jonathan’s Achilles heel. Here again he has failed because the true story of Malabo is already very well known to Nigerians.

Mr Lamido, we believe, is too smart not to realise that when the pot conveniently calls the kettle black, it is a grand design to confuse, deceive and cover up the truth. Lamido served as Governor of Jigawa State for two terms under the platform of the Peoples Democratic Party (PDP) after which the ruling APC took over his state.  Is he then telling Nigerians that he cut a deal with APC, helped the ruling party to procure victory at the polls and take over his state?

The fact is that it is not only in Bayelsa State that the country had experienced such a situation where PDP or even APC had lost elections to another party. Holding Jonathan responsible for PDP’s loss in Bayelsa without first investigating the issues that determined the fate suffered by the party in the state is not only disingenuous but also detrimental to the image and aspirations of the party.

It is true that Jonathan who is a former deputy Governor and Governor of Bayelsa States as well as former Vice President and President of this country is well loved and respected by his people. However, it will be tantamount to playing God for anybody to expect that the former President should command a vice-like grip on every Bayelsan in all the local government councils in his state.

Rather than cast aspersions and throw shades because of pre-existing animosities and prejudices against the former president, what is expected of party leaders like Mr. Lamido is to seek to interrogate whatever went wrong in Bayelsa, to avert a repeat in another state.

We believe that further interrogation of Lamido’s other weird claims is not necessary in this space, lest it gives the unfortunate interview more attention than it deserves. However, we feel that it is important to reiterate, as we have always done, that former President Jonathan did nothing wrong as far as the Malabu deal is concerned. He therefore doesn’t need to cut a deal with anybody within or outside Nigeria.

For the umpteenth time, we restate the following facts to proclaim Dr. Jonathan’s innocence:

The fact remains that as recent national events continue to vindicate former President Jonathan, and as the world continues to celebrate him, those who are insecure will feed such propaganda to their media agents to serve their narrow interests.

We have always made it clear that beyond this wave of conjecture, former President Jonathan was not linked, indicted or charged for collecting any monies as kickbacks or bribes by any law enforcement body the world over.

It bears repeating that the documents relating to the transactions and decisions of the Federal Government on the Malabo issue, during the Jonathan administration, are in the relevant Government offices, where they are accessible.

We call on anyone, including Mr. Sule Lamido, who has any shred of evidence linking former President Jonathan to any wrongdoing in the case of the Malabu incident to waste no time in publishing such evidence or forever remain silent.

While we wait for such an impossible task to be undertaken by Mr. Lamido and his co-travellers, we would also want to draw their attention to the following fact:

Dr. Goodluck Jonathan as an elder statesman, is a father figure to all Nigerians. His door is open to all who wish to pay him courtesy visits or seek his counsel. That should not mean that he automatically subscribes to whatever political agenda his visitors subscribe to.

While he was president, former President Jonathan had the largeness of heart to receive then members of the All Progressive Congress at Aso Rock Presidential villa, including Muhammadu Buhari, who he conferred an award on in 2014. Ahead of the last governorship election, most of the gubernatorial aspirants and candidates from different political parties in Bayelsa state visited Jonathan as a father of the state and that is a role the former President will continue to play.

We wish to state categorically, that Dr. Jonathan remains a faithful member of the PDP and had no reason to have worked against his political party in the last election. That the PDP lost in the gubernatorial election to APC is unfortunate, but attributing the defeat to the former President is to be gratuitously obsessed with blackmail and red herring.

Finally, Dr. Jonathan would want to counsel Mr. Lamido and others in his shoes to look at their national passports. They would see that their citizenship is Nigeria. We are first Nigerians before we are members of any political party or social organisation. If Mr. Lamido does not know that, then it is a pity. A big pity indeed.

Oshiomhole Pleads With APC Govs: Be The First To Pay N30k Minimum Wage