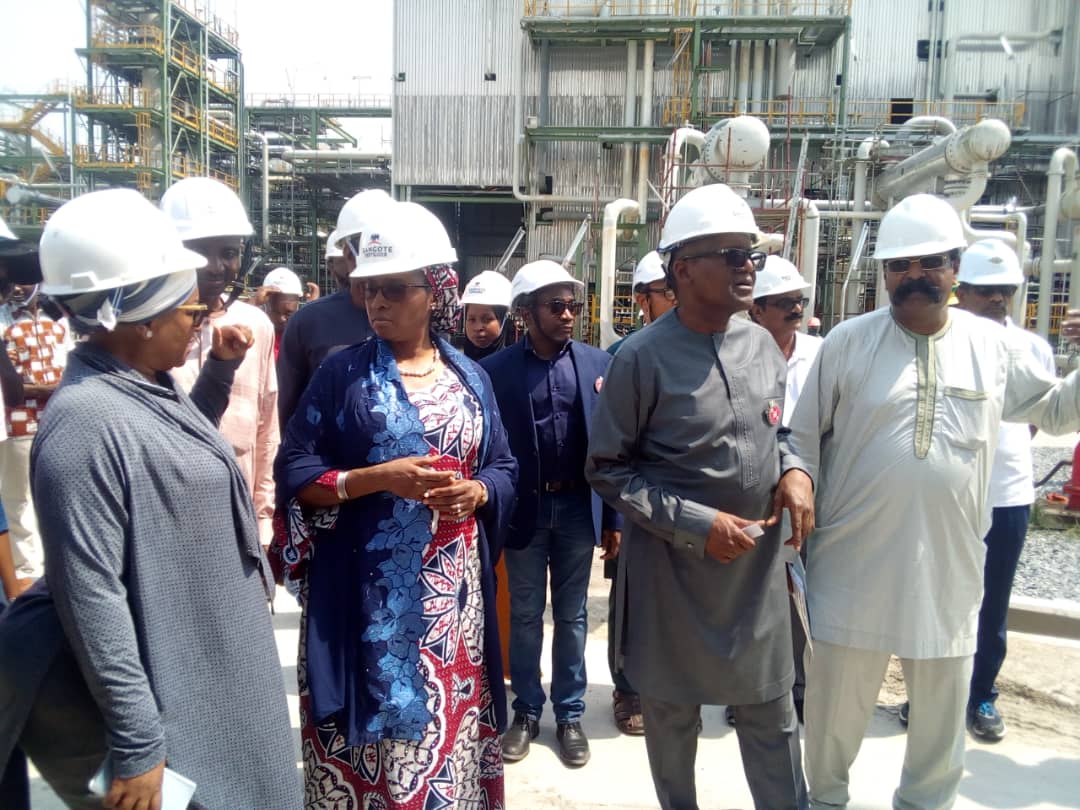 The Federal Government on Sunday commended the Dangote Group for its proposed plan to expand its domestic revenue generation drive from four billion dollars to 30 billion dollars annually from 2021 to boost the nation’s economy.

The Minister of Finance, Budget and National Planning, Mrs Zainab Ahmed, gave the commendation during  an inspection of the Dangote Refinery, Petrochemicals, Fertilizer Projects and the Deep-water Jetty at  the Lekki Free Trade Zone in Lagos.

She commended the foresight and tenacity of Alhaji Aliko Dangote, the  President of the Dangote Group for pursuing the huge projects despite various challenges.

She  pledged the Federal Government’s continued support for local businesses to thrive and  attract investors.

“Dangote Group is creating a large export industry that will help to bring in foreign exchange into the country reserves and as a business, he will be growing his revenue base from four billion dollars  to 30 billion US dollars.

“We are very confident that once Dangote Refinery commences  operations,  it will save us over 10 billion dollars  that Nigeria was spending  on importing crude oil and it will  also help us  to build local capacity and create jobs,’’ she said.

Ahmed said  that the savings  from such an investment would  strengthen Nigeria’s macro economy to attract more investors.

The minister said that  the opportunities were good for  the Dangote Group but would be  better for Nigeria which would  enjoy several benefits .

She said the the  Dangote Group had the capacity to fund the infrastructure needs of the ambitious projects and  would continue to enjoy government’s waivers available to other businesses in the nation.

She added that the projects had begun to  create thousands of jobs and bringing several  specialisations and skills to Nigeria.

Also  the President of the Dangote Group, Alhaji Aliko Dangote,  in his address  said that the firm had adopted measures that would help it to expand its revenue base from four billion dollars  to 30 billion dollars annually beginning from 2021.

He said that the firm was ready to transform the nation’s domestic market by providing forex through expanded operations capacity of its group in the refinery, petrochemical, fertilizer and other supporting projects.

“Our refinery can meet 100 percent of the Nigerian requirements of all liquid products such as:  gasoline, diesel, kerosene and aviation jet. It will also have surplus of each of these products for export,’’ he said.

He added that the ongoing projects at the Lekki Free Trade Zone had the capacity to generate about 32,000 direct and indirect jobs during and after completion.

“With the new areas of investments, we are doing just four billion dollars of revenue now.

” By the time we finish and  beginning from  2021,  we will be having $30 billion of revenue because we will by then have the refinery, petrochemical and fertilizer all coming on stream, also, over a million tons of rice.

“We will have about 600,000 tons  of locally made sugar by that time  and our cement will  have gone further.

“And beginning from January next year, eight million export facility of our cement  company to other Africa countries to generate foreign exchange will commence operations,’’ he said.

Dangote said that the firm  was targeting to meet the nation’s forex needs through its huge investment by  turning around  the group’s entire 20 billion dollars’ investment.

He said this would yield the annual 30 billion dollars domestic revenue.

He said that the firm had been able to meet its energy needs and called on other private sector investors to partner government in power supply to have a meaningful GDP growth.

“That will strengthen us to invest more money in our domestic economy.

“We have tried that in cement and it has really worked in the sense that we are looking at exporting almost   500 million dollars worth of cement in the next one to two years,’’ he said.

She commended the quality of rigid pavement being constructed.

The minister said that 19 roads across the country were  being built under the tax credit scheme which Dangote Group leveraged on to take up the project.

Ahmed called on other private sector investors to buy into the scheme to bridge road infrastructure gap in the nation.

“This is the kind of standard that we want roads to have in Nigeria,“ she said.