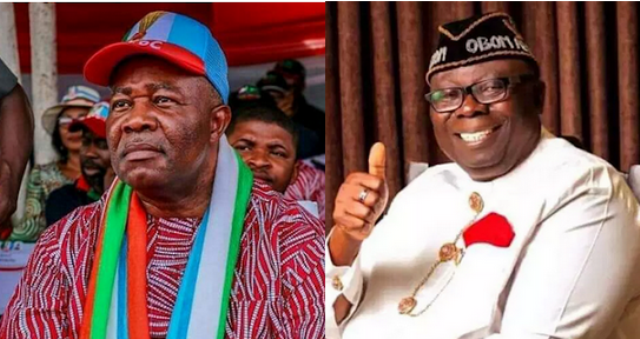 The state chapter of the People’s Democratic Party, (PDP) and its candidate for the Ikot Ekpene Senatorial seat in the 2019 election Senator Chris Ekpenyong have expressed divergent views over the decision of the candidate of the All Progressives Congress, Senator Godswill  Akpabio to withdraw from the contest.

While Ekpenyong described the decision of Akpabio to pull out from the re-run as a welcome development, his party the PDP, has viewed it as fear of being defeated again thereby generating confusion within the political landscape.

Ekpenyong in a statement on Sunday in Uyo had said, “I commend my brother for his decision to withdraw from the Court-ordered rerun in Essien Udim and that will go a long way to calm frayed nerves and create the enabling environment for the dividends of democracy to thrive beyond party lines.

“I am a Senator of the Federal Republic of Nigeria and not for a particular party. My mission to the Senate is to align with my colleagues and other political appointees from the state to attract development and peace to the people of my Senatorial district.”

Ekpenyong even commended President Muhammadu Buhari for the appointment of Akpabio as Minister of Niger Delta Affairs and expressed confidence in him to effectively deliver on his assigned duties.

But Ekpenyong’s PDP appears not satisfied with the explanation given by Akpabio that his reason for pulling out of the race was to face his Ministerial duties and the Niger Delta people.

The party in a statement at the weekend signed by its publicity Secretary, Ini Ememobong, Senator Akpabio’s questioned if he would have withdrawn from the re-run if the Court of Appeal had granted the reliefs he sought for?

And the response of the PDP in the statement entitled, Akpabio’s Withdrawal: An attempted flight from repeated failure” indicates that Akpabio’s asking that his position be replaced by his party APC for the re-run actually incensed the party.

The statement reads in part, “Our response to that joke taken too far is that the rerun is a court-ordered election to complete an earlier started electoral exercise, which by the judgment of the court has been declared inchoate.

“The only way the APC can substitute a candidate is if the incumbent candidate dies a physical death, not a political death as that currently witnessed. Senator Akpabio was a party candidate before the court and the order of the court is that he should go back for a rerun in Essien Udim.

“As a lawyer, he should obey that order and submit himself for confirmatory defeat. The purported withdrawal of the Senatorial candidate is a clear face-saving attempt by Chief Akpabio, in a bid to avoid a recurring defeat by Senator Chris Ekpenyong, whom he had earlier boasted was not a match for him.

“We urge the Independent National Electoral Commission to treat the withdrawal letter of Senator Akpabio as a concession of defeat and hold that APC has no candidate in the forthcoming Senatorial rerun due next year.

“Additionally, we ask the commission to ignore and discountenance the shameless demand for the removal of Mike Igini as REC. This call is ill-motivated as he wants REC that will allow him the liberty to concoct results in Essien Udim during the rerun, as that is the only way he can win elections there.”

Reliable information from the Ikot Ekpene Senatorial district is that Ekpenyong’s opinion seemed to represent the opinion of the people of the area.

Before the Appeal court judgement that the people of the district had feared that some Akpabio’s detractors in his own APC in the state were actually the ones encouraging him to continue with the legal battle because they know that his chance of winning is slim.

Some analyst have even observed the unusual quiet in the camp of the APC on Akpabio’s  decision to withdraw from the re-run election last week and subsequent reaction of the PDP to that action since last Friday.

A source from the party who spoke on ground of anonymity expressed anger that the APC government was accommodating only Akpabio’s loyalists that recently moved with him into the party , neglecting the people that have been on ground over the years.

Disquiet Over Abiodun’s Plot To Sideline Osoba In Ogun