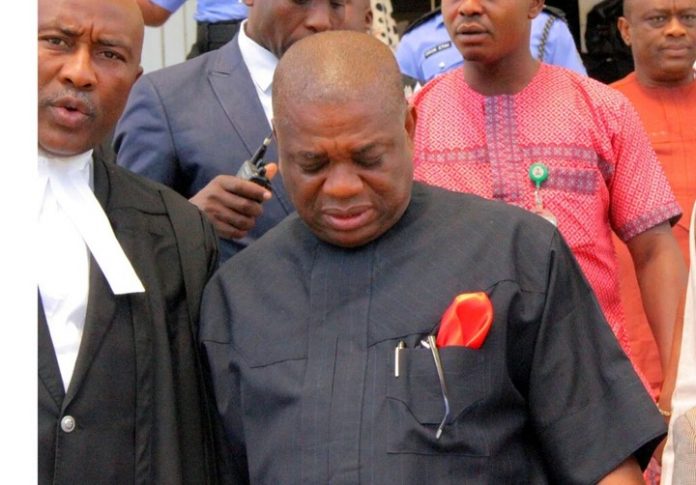 Convicted Senator and former Governor of Abia, Orji Kalu, on Tuesday prayed  a Federal High Court in Lagos to grant him bail from the Ikoyi Custodial Centre pending determination of an appeal against his conviction.

Justice Mohammed Idris had convicted Kalu and sentenced him  to a concurrent jail term of 12 years for  N7.2 billion fraud.

The Economic and Financial Crimes Commission (EFCC)  prosecuted Kalu together with a former Commissioner for Finance in Abia,  Jones Udeogo, and Kalu’s company, Slok Nig. Ltd.

They were charged on an amended 39 counts  of fraud.

The trial, which started in 2007,  recorded some set backs but eventually ended in October 2019 when parties in the suit adopted written submissions.

On Dec. 5, the judge found all the three defendants guilty.

He found Kalu and  Slok Nig. Ltd. guilty of all the 39 counts of the charge, and convicted Udeogo on 34 counts.

Idris sentenced Udeogo to a concurrent 10 years’ jail term and ordered that Slok Nig. Ltd. should be wound up and all its assets forfeited to the Federal Government.

On Tuesday, Kalu’s counsel, Mr Lateef Fagbemi (SAN) informed the court of a bail application he filed on behalf of the former governor, seeking to be released on bail pending the outcome of his appeal against the judgement.

He told the court that the application was premised on 23 grounds and supported by a 38-paragraph affidavit.

Fagbemi added that after receiving the counter-affidavit filed by prosecution, he filed a 34-patagraph further affidavit with one exhibit attached.

Fagbemi also drew the court’s attention to a notice of appeal against Kalu’s conviction, and  relied on the provisions of Sections 241 of the Constitution in urging the court to grant the bail.

“If there is a right of appeal, then there is a corresponding right of bail pending appeal,” he said.

Citing Sections 6 of the Constitution, Fagbemi argued that the court  had the powers to entertain such an application since post-judgement jurisdiction were anchored on the section.

He said that the bail would enable Kalu to attend to his health as well  return to the National Assembly to carry out service to the nation.

“Although bail is generally a right of an accused as guaranteed by the Constitution, it is not a right available to a convict because the presumption of innocence had crystslised into guilt and conviction,” he said.

According to Jacobs, an application for bail pending appeal is sparingly granted.

He said that such a bail could be granted  in a situation where the term of imprisonment would have elapsed before  determination of the appeal.

He argued that that was not the situation with Kalu’s case.

On Kalu’s health condition, Jacobs said that there was no recent medical report to show his state of health, arguing that the medical report tendered in his case was done more than  a year ago.

Jacobs added that the request by Kalu to be released on bail so as to seek traditional medicine was not a tenable, as visitors were allowed into the custodial centre.

“He says he needs his  herbalist to treat him but he has not said that his herbalist came to the prison and was not allowed to see him.

Citing the case of Federal Republic of Nigeria vs Joshua Dariye, he argued that the Nigerian criminal jurisprudence was robust enough to handle appeal and dispense with same within a reasonable time.

Besides, he argued that the medical facilities at the Ikoyi Custodial Centre were  capable of handling Kalu’s  medical condition.

Liman adjourned the case until Dec. 23 for ruling on the bail application.

The News Agency of Nigeria (NAN) recalls that EFCC had on Oct. 31, 2016, preferred a 34-count charge bordering on N3.2 billion fraud against the convicts.

The commission said that the sum formed part of funds illegally derived from the coffers of the Abia Government.

In one of the counts, EFCC said that  Slok Nig. Ltd. and one Emeka Abone, who is said to be at large,  retained N200 million in the company’s account on behalf of Kalu.

In counts one to 10, the commission said that the convicts retained in different bank accounts, about N2.5 billion belonging to the Abia Government.

It said that the convicts diverted cumulatively over N7.2 billion from the Abia treasury during Kalu’s tenure as the governor, in contravention of Sections 15(6), 16 and 21 of the Money Laundering (Prohibition) Act, 2005, Money Laundering Act of 1995 as amended by Act No.9 of 2002, and Section 477 of the Criminal Code Act of 1990.