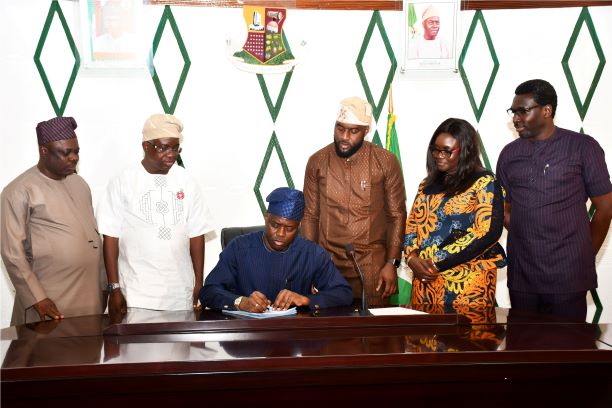 The 2020 budget signing ceremony, which was held inside the State’s Executive Council Chambers, Governor’s Office, Agodi Ibadan, was witnessed by the Deputy Governor, Engineer Rauf Olaniyan; the Speaker of the House of Assembly, Rt. Honourable Adebo Ogundoyin, members of the House of Assembly and other top government functionaries.

Governor Makinde, who declared that the Government would target a minimum of 70 per cent implementation, stated that the budget would achieve landmark infrastructural development in the State.

He said: “So, as I stated in the budget presentation speech, our objective is to, at least, achieve 70 per cent implementation at the end of the 2020 fiscal year.”

A statement by the Chief Press Secretary to Governor Makinde, Mr. Taiwo Adisa, indicated that the budget was geared towards achieving the plans outlined in the roadmap for accelerated development of Oyo State from 2019-2023.

Governor Makinde said: “The Appropriation Bill for the 2020 fiscal year, which I am about to sign into Law, represents the aspirations of the people of Oyo State. It is geared towards achieving the plans outlined in our roadmap for accelerated development in Oyo State from 2019-2023. We produced this document during the electioneering period and it is exactly what we are following.”

The Governor commended the Oyo State House of Assembly for the prompt scrutinising and passing of the proposed budget bill in order for the implementation of the budget to start from the beginning of the next year.

The Governor hinted that all the civil servants would receive their 13th month salary by the 28th of December, 2019.

“Before we draw the curtain on 2019 fiscal year, I mentioned it during my last media chat and I have also mentioned it this morning that our civil/public servants will receive their 13th month salary by December 28,” he said.

“The total amount passed by the state House of Assembly was 213,788,33,2.97. This is an increase of 4,935,60,124.97 compared to the budget proposal we submitted. So, in reality, the House of Assembly has graciously added more money to the budget, probably they did it on the expenditure side, they will still have to come back to us on the revenue side.

“We are all aware of the validation exercise that is going on. On one hand, we hope that it will allow us to eliminate ghost workers syndrome and, on the other hand, we have just set up the Committee to engage the Labour Union to seek alignment on the new minimum wage issue. So, we will keep a close watch on what has been approved by the House of Assembly on the side of the recurrent expenditure.

Related Topics:MakindeOyoSeyi Makinde
Up Next