Obaseki: Buhari Has Told Us To Check Oshiomhole's Antics 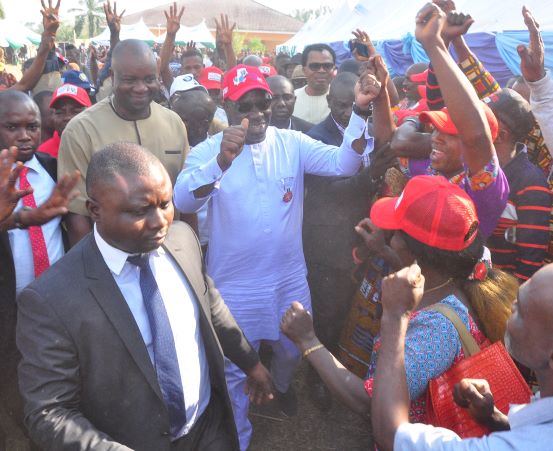 Godwin Obaseki has reaffirmed that there is no division in the Edo State Chapter of the All Progressive Congress (APC), noting that Muhammadu Buhari has directed that all those working to destabilise the party should be shown the way out.

The governor said, “Members of the EPM are trying to frustrate the good plans we have for Edo people as their plan is to burn markets and government buildings. Their intention is to discredit our administration but the people of Edo know better.

“APC is one party; those that say they are in EPM are not APC, including their National Chairman who we have suspended in Edo State. Those mistakenly elected into Edo State House of Assembly (EDHA) who are members of EPM have been thrown out and the Independent National Electoral Commission (INEC) is aware and will soon announce date for a fresh election, where we would have opportunity to elect credible representatives who will represent us in the House.

Obaseki continued, “Any person doing anti-party activities, President Muhammadu Buhari has asked us to deal with them. We have been told to go back to organise our party; that’s why we are here. As a ruling party in the state, we have done a lot for Edo people, moving the state forward progressively but EPM are afraid of progress and will do anything to ensure we don’t get another term.”

Governor Obaseki said his administration is achieving a lot in agriculture in the state, as his government would soon commence work on Sobe-Sabogida-Ora road.

“Go to Sobe, we have just started harvesting corn. I have told the contractor to start work on the Sobe-Sabogida-Ora road. In that road alone, I want to do 5,000 hectares of cassava farm; I am a governor for development”.

He continued, “The support here today is massive and it speaks volumes, further showing that the suspended National Chairman’s antics will not work. He no longer has the support of Edo people. The act of trying to create a faction of APC in Edo State can’t work; we are still intact, strong and united. Our politics in Edo state is transparent and can’t tolerate any act of dubiousness. If you are a progressive, you must be a real Progressive.”

Chairman of Owan West Local Government Area of Edo State, Hon. Frank Ilaboya commended the governor for his developmental strides in the state, assuring that the people of Owan-West LGA will not negotiate his second term ambition.

Also, the LGA Chairman for Owan-East LGA, Hon. Andy Osegwue, said the people are behind Governor Obaseki because of his uncommon achievements in Edo State.

APC leader in Owan West LGA, Hon. Peter Eguaboi appealed to the governor to help reconstruct Sobe-Sabogida-Ora, Afuze- Era, Ozala-Afuze and Era-Warake roads, while his counterpart in Owan East Alhaji Ganiyu Lawani said the people of Owan East and West are united and will give the governor all their votes.

The host, Sir Tony Ezekiel, an APC leader in the area, said though he was intimidated out of the state four years ago, he has now returned to join hands with the governor to develop the state.

“Obaseki is doing well in developing the state; I have gone around and seen the work of the governor. He has developed the agricultural and educational sectors; trained teachers and civil servants; constructed roads and a lot of other things to make life better for Edo people. We will support him all the way.”