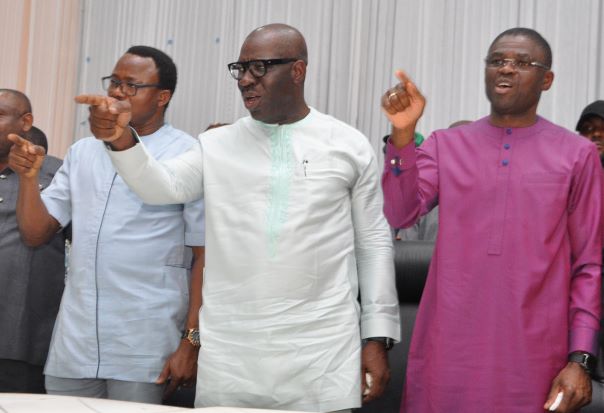 Godwin Obaseki, has said the suspension of the National Chairman of the All Progressives Congress (APC), Comrade Adams Oshiomhole from the party will stand until he apologises to the APC.

The governor said this during an expanded meeting with leaders of the APC from all the wards and local government areas in Edo North held at Jattu-Uzaire, Etsako West Local Government Area of the state.

Governor Obaseki said due process was followed in the suspension of Comrade Oshiomhole, and that any action taken by the suspended national chairman remains ultra vires.

Obaseki stated that the national chairman could only be considered back into the party when he apologises to members of the APC, noting that Oshiomhole could not take any action on behalf of the APC because he was validly suspended from his ward.

The Governor said, “Can you imagine a national chairman that is creating problems in his own house? Because of that, we had to suspend him and he remains suspended. We pray that God should have mercy on him because he has done something bad against God and the people of Edo State; he should find his way back into the party and apologize to all of us.

“If he comes back remorseful and apologetic, we will consider taking him back.”

The governor dismissed the speculation allegedly peddled by his political opponents that he was leaving the APC, noting that it is the persons involved in anti-party activities that will leave.

“If you cannot be a disciplined member of the party, you will leave the party, whether you are a national chairman or not”, he warned.

Governor Obaseki said the APC national chairman lied about nominating only one Commissioner in his cabinet, adding, “He cancelled the primaries that were initially done by the party at the state level for the 2019 general elections and did his own. Because he could not control us at the executive, he manipulated the legislature so he can use the house to impeach us.”

The governor said he sympathises with the deputy governor who was deceived by, Oshiomhole, a man who he had always looked up to in politics, describing his deputy as a trusted friend and strong politician.

“Oshiomhole thought he was setting a trap when he chose Philip Shaibu as my deputy and Osarodion Ogie as Secretary to the State Government. He was thinking that we will always quarrel, fight and then run to him for settlement.”

Obaseki maintained that the party and its members do not support godfatherism in the state, adding, “If you behave like godfather, we will fight you”.

He added that he attended the meeting to thank the party members for their support for his administration and standing behind their son, the deputy governor of the state.

Some of the party leaders who spoke during the meeting said their loyalty was for the governor and his deputy and supported their reelection for a second term.

On his part, Shaibu said that the leadership of the party in the senatorial district is united and supportive of the vision to develop the state.

He described Governor Obaseki as a man that has redefined politics in Edo State, noting that no man can truncate the developments being made by the Obaseki led administration.

Earlier in his remark, Edo State APC Chairman, Barr Anselm Ojezua said APC in Edo is intact and would within the next 24 hours announce a committee for mobilisation of new members into the party from across the 18 LGAs.

He said it was unfortunate that the national chairman allowed some persons to deceive him despite knowing that the governor is the leader in the state.

According to Alhaji Usman Shagadi, APC leader from Etsako West, “The only leader we know in Edo North is Hon. Philip Shaibu and we support the Obaseki-led administration because it is people oriented.”