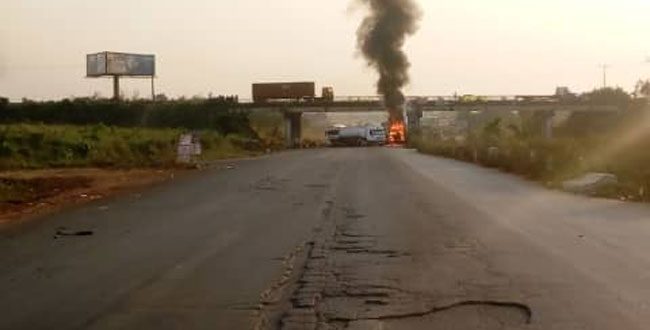 The Ogun Command of the Federal Road Safety Corps (FRSC) on Thursday said that the Sagamu Interchange Bridge, along  the Lagos-Ibadan Expressway would be temporarily closed from today.

Mr Clement Oladele, the Ogun Sector Commander of the FRSC,  told the News Agency of Nigeria (NAN)  that the temporary closure was due to the damage caused by the two tankers that caught fire there  on Christmas day.

The  Ogun Sector Commander  spoke with NAN in Ota,Ogun.

NAN reports  that two tankers laden with 33,000 litres each, on Dec.25, crashed into each other due to speeding on the outward bound of the  Lagos-Ibadan Expressway under  the Sagamu Interchange Bridge ,close the to FRSC Emergency Roadside Clinic.

The sector commander said that the FRSC had  invited some engineers from the Federal Ministry of Works and Housing to assess the bridge.

He added that they were also  to confirm  whether vehicles could still be plying it due the intensity of  damage done to the section of the bridge on Dec. 25.

“The  temporary closure  is based on their professional advice that the fire had destroyed the integrity of that section of the bridge and it  will  not be safe for motorists until it had been reinforced.”

Oladele advised  the members of the public to avoid the use of that section of the bridge till  it had been  reinforced.

He implored the motorists to cooperate with the  FRSC and  other sister security agencies that would enforce the temporary closure of the bridge until after it would have been repaired and reopened to motorists.

The FRSC boss said motorists approaching the Sagamu Interchange Bridge from the Eastern part of Nigeria through   Ijebu-Ode end should detour right at the back of the FRSC Emergency Roadside Clinic at  Sagamu to connect the Lagos – Ibadan Expressway leading to Ogere.

He  said that they should  then make a U – turn before Ogere town and continue their journey to Lagos.

Oladele also said that  vehicles coming from Abeokuta and heading to the Eastern part of Nigeria through Ijebu Ode should avoid the Sagamu Interchange Bridge.

He advised them to  turn  right immediately after Nestle Company Plc to proceed to the expressway leading to Lagos and  then make a U – turn after Kara – Sagamu which is after the Julius Berger Construction Company Yard, Sagamu.

He said from ther, they should  reconnect the Sagamu- Ijebu Ode – Ore – Benin Expressway to continue their journeys.

Christmas: MFM Gives More Reasons For Position But Will Not…