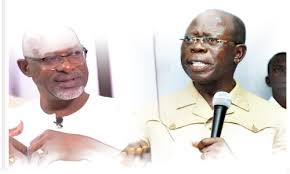 Chairman of the Edo State Chapter of the All Progressives Congress (APC), Barr. Anselm Ojezua, has assured party members that there is no cause for worries despite the altercation between the governor, Mr. Godwin Obaseki and the National Chairman of the APC, Adams Oshiomhole, noting that no man can play God in the state’s politics.

He reaffirmed that there is no division in the state’s chapter of the party, adding that Governor Obaseki remains the leader of the party.

Ojezua said, “There’s nothing to be afraid of as no man is God and God is firmly standing with Edo people. Secondly, you will hear them say APC in Edo State is divided; is there anybody of substance in Edo North who is not here today?

“That division is in the imagination of some people, not in the APC. The APC in Edo is intact and would soon announce a committee for mobilisation of new members from across the 18 LGAs. We must remain focused and avoid distractions from enemies of our great party.”

He continued, “Whatever is happening in Edo today is not new; this is the third time. The first was between Chief Anenih, who claimed to be the leader of the party and Lucky Igbenedion, who the constitution empowers to be the leader. For the records, the constitution of the Federal Republic of Nigeria, not even that of the APC, recognises two leaders, the President of the country and the governor of the state.

“So, Anenih said he was the leader, we said no, that it was Lucky Igbenedion because he was the governor. In the end, they won by manipulation but the people of Edo State went to court and Comrade Oshiomhole was declared governor.

“This same Ize-Iyamu he is bringing now, said he will decide who leads the party in Edo State and when we insisted, he got annoyed and threatened to quit the party. He specifically said once he leaves, the APC in Edo State will die. But years after he left did APC die? No, instead we are stronger, formidable and united.”

Ojezua said, “Now, it is that same Oshiomhole who is claiming leader of the party forgetting how he fought in the past. He said Governor Obaseki is in charge of administration, while he controls the state’s politics since Obaseki isn’t a politician but a technocrat.

But we say no. This too shall pass and we, the people, shall emerge victorious as always. It is just unfortunate that the national chairman allowed some persons to deceive him despite knowing that the governor is the leader of the state.”