Saraki To Kwara Gov: You Have Crossed The Line With My Father 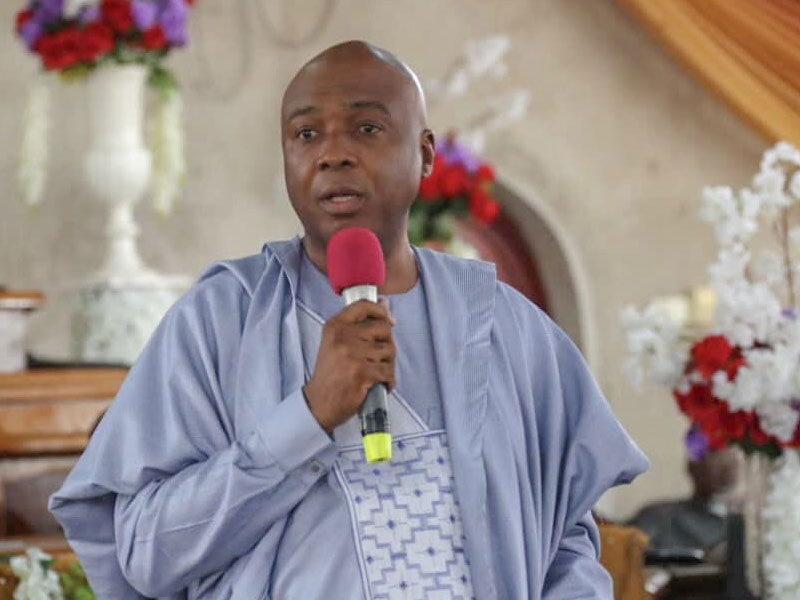 Saraki, in a statement he personally signed and released in Lagos on Saturday stated that the war of attrition waged against the legacy of his father and everything that belongs to the late politician simply portrayed the Governor as a man who lacks the sense of history and set out only to fight the Saraki family but not to serve the interest of Kwarans.

“Yesterday night, the Kwara State Governor, Abdulrahman Abdulrazaq finally showed his true colour when he announced his decision to revoke the ownership of a property rightfully held by my late father, Dr. Olusola Abubakar Saraki on Plots 1, 3 and 5 Ilofa Road, GRA, Ilorin popularly known as Ile Arugbo, (Old People’s home) which since the Second Republic, has always been used to host the weekly gathering of a multitude of aged people in the society who are provided food, money and health services, as part of the social welfare programme sponsored by the late politician. The tradition has since been maintained.

“Before now, this same Governor had invited all the members of the State House of Assembly and directed them to commence the process of amending the law to change the name of the State University which the last administration renamed after my late father, Dr. Abubakar Olusola Saraki. He then followed up on this act of vengeance by initiating a bill to rename the University and expunge the name of the late Dr. Abubakar Olusola Saraki. Now, he has decided to also revoke the titles of the landed property which belongs to the late politician. Maybe, Abdulrahman Abdulrazaq thinks his will be the last administration in Kwara State but definitely, this is self delusion.

“The property had been rightfully allocated to my late father under the name of one of his companies, Asa Investment Limited, since the 1980s and contrary to the claim of the Governor, the land was properly allocated and a Right of Occupancy title issued on it.

“It should be noted that the excuse given by Abdulrazaq in his revocation order holds no water since it is clear that this is the height of his vengeance against my father, Dr. Abubakar Olusola Saraki and I.

“Till today, many Kwarans have been wondering what problem the Governor has with the late Oloye Abubakar Olusola Saraki or what the late politician did to offend him. It is surprising that of all vacant plots of land in strategic places across Ilorin township, the one that Abdulrahman found useful for his vengeful plan is the one owned by late Dr. Saraki. It is beyond comprehension why a governor would set as his main agenda the objective of undermining and waging a war of attrition against a man who is no longer around.

“This action is clearly a manifestation of vengeance and it shows that this Governor is not out to serve any public purpose or pursue any development agenda. In his narrow-mindedness, he believes his victory at the polls is an empowerment, entitlement and enablement to settle scores, provoke and pursue inter-family rivalry.

“Those who voted for the party in power in Kwara State and Abdulrahman Abdulrazaq obviously did not vote for the man to enable him wage war against Dr. Olusola Saraki and his legacies. They expected development and fulfillment of promises.

“If the Governor believes people are not taking stock of his misguided and deceptive actions and that because he is in power, he could do whatever he likes, he must be a joker. Also, this war against the Sarakis will not successfully veil his unpreparedness for governance and divert people’s attention from the glaring lack of visionary, clear-cut plan to deliver on his empty promises to the people. He definitely cannot get away with all the atrocities he has been committing.

“Since the outcome of the elections in March, despite the fact that there are clear grounds to challenge the results in court, I have decided to demonstrate maturity, statesmanship and sportsmanship. I have chosen not to make comment on the policies, programmes and actions of the administration in Kwara State or that of its head. Also, I deliberately stayed away from the state to avoid creating any distraction for the administration. My decision is borne out of a genuine restraint to enable the administration settle down and fulfill its numerous promises to the people of our state.

“However, seven months down the line, Abdulrahman Abdulrazaq has shown that its cardinal Programme is to wage war against my late father and I. He has demonstrated that his only competence and astuteness is in the area of viciously assailing the late Oloye Saraki and I.

“Definitely, he is a man with no sense of history. Enough is enough. Now, he has crossed the line.

“Perhaps, I should let it be known that if Abdulrahman Abdulrazaq thinks he is taking all these actions to get at me, he is only deceiving himself. There is no basis for competition between us. Our paths cannot cross because the status that he is struggling to attain, Almighty Allah has given it to me many years before now. I became Governor 16 years before him and served out my constitutional limit of eight years.

“Within the period, I was Chairman of Nigerian Governors Forum. I have moved on to serve in the federal legislature and by the grace of God, I headed the National Assembly as the number three man in the country. No matter, how well he tried to rewrite history, it is on record that I left Kwara State a lot better than I met it.

“In fact, the University that he is struggling to rename was established by my administration as just one out of many legacies we left behind. This Governor needs a lot more efforts, years, Intelligence and resources to attain the level Allah has taken me, not to talk of my late father, Dr. Olusola Abubakar Saraki, the Senate Leader in the Second Republic.

“As Governor, I used the position to serve the people and during the period I did not dishonour his own father or anybody’s father for that matter.

“Just as I did after the election, my advise to Gov. Abdulrahman Abdulrazaq that he should devote his time and energy to providing good governance and genuine development of the state.

“It is well known to the Governor that I fear nobody, except Almighty Allah, the ultimate owner of all powers. With all his subterranean and open moves against my family, person and property, I remain unmoved.

“This Governor has shown that he is not a man who wants peace, co-operation and development. He believes that a constant attack on my family and I is all that he needs to win the hearts of Kwara people. The need to provide good governance is secondary to him.

“However, it should be made clear to Abdulrazaq and his administration that their attack on my late father cannot erase the legacies of Oloye. No evil design, negative plot or propaganda can successfully rewrite the history of Kwara State. This plot against my late father will not stand. And I will like to make it clear that we will contest this petty, malicious, dubious and bias action of a parochial, vicious and vindictive administration through all legal means. We are sure this is not an action taken in public interest. Rather, it is done in pursuit of a selfish and devious objective”, Saraki stated.

Buhari Has Only Put PDP Looters Out Of Job – APC

Despite Role In Rivers APC Crisis, Abe Is Thankful