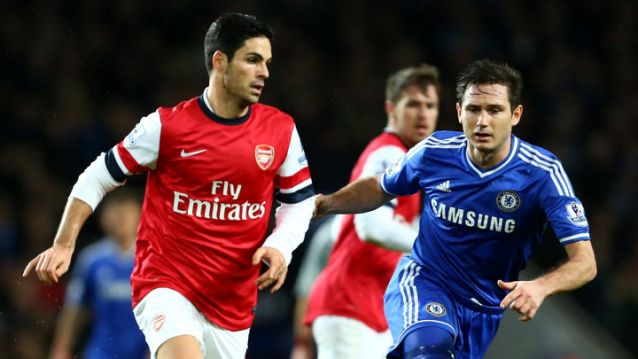 Arsenal’s new manager Mikel Arteta will be aiming to show the world what he is made of if he can outwit Chelsea’s Frank Lampard when both London teams meet on Sunday.

Both coaches who in their earlier years played against one another in the respective teams they now coach take their rivalry to the dugout in one of the most anticipated features of the weekend.

Both teams have come under much scrutiny this season following inconsistent shows of potentials.

Frank Lampard’s tutelage has had its ecstatic and sad moments. After surprisingly defeating Jose Mourinho’s Tottenham away, he came home to lose to Southampton at Stamford Bridge.

That defeat meant that Chelsea had lost back to back games at home for the first time in the 21st Century.

This season’s first London derby between both teams is bound to be particularly interesting.

Arsenal currently sit 11th in the league table and their new manager is under pressure on the hot seat. He is embroiled in the current crisis facing the current Gunners squad and his task to reinvigorate the team is quite daunting.

A 1-1 draw at Bournemouth in the last match showed the fighting spirit by the team to get back to winning ways. Mesut Ozil who has been criticized for his lackadaisical attitude towards putting his best for the team, was impressive and the attacking duo of Lacazette and Aubameyang linked up well upfront.

Favorably, Aubameyang  scored a goal to take him above Chelsea’s Tammy Abraham on the goalscoring chart. Abraham has scored 11 while Aubameyang has 12.

On 22 March 2014, Jose Mourinho called Arsene Wenger a specialist in failure prior to Arsenal’s 6-0 loss in the hands of Chelsea. That was one of the memorable moments in this fixture’s rich history and is undoubtedly the most poignant victory by either side in recent times.

In the Europa league final last season, Chelsea denied Arsenal a place in this season’s Uefa Champions league after their 4-1 victory. Although Chelsea had already qualified as they finished in the top four.

Arsenal have won two of their last three Premier League home games against Chelsea (D1), as many as they had in their previous 12 against the Blues (D5 L5).

Arsenal have never lost a Premier League home game against Chelsea when they’ve scored the first goal, winning 11 and drawing four of their 15 such games.

Arsenal lost their final league game of 2018, 5-1 against Liverpool. They’ve not lost their last league game in consecutive calendar years since 1994/1995 (vs QPR and Wimbledon).

The highest attendance was in 2017. There was a crowd of 89,472 people at the Wembley stadium. Arsenal went on to win the game 2-1

Cesc Fabregas, Nicolas Anelka and Olivier Giroud are part of the players who have featured for both clubs.