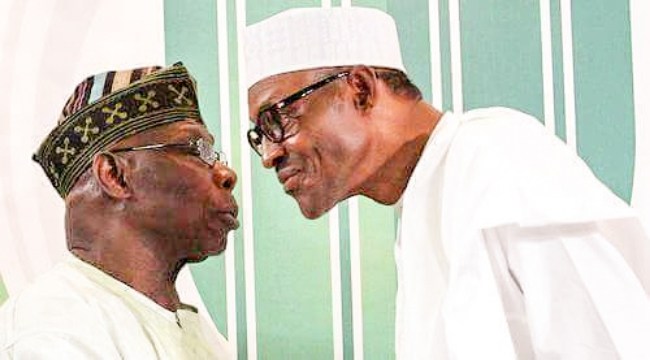 Supporters of President Muhammadu Buhari have faulted Dr. Olusegun Obasanjo’s claims about the prospects of the nation’s debt overhang crippling the nation.

The Buhari supporters under the aegis of the Buhari Media Organisation, BMO in a statement accused the former president of twisting the facts for political purposes.

Obasanjo had said, at a public forum in Lagos, that Nigeria might become bankrupt due to the country’s mounting debt which he put at $84billion from the $10billion the Buhari administration inherited in 2015.

BMO, in a statement signed by its Chairman Niyi Akinsiju and Secretary Cassidy Madueke, said Chief Obasanjo is toeing the path of his former deputy with outright lies on the nation’s debt stock.

“Just like the Presidential candidate of the Peoples Democratic Party (PDP) Atiku Abubakar did in a recent article, the former President completely ignored truth by claiming that the Buhari administration inherited a debt of $10bn when it indeed was $63bn.

“We are surprised that not so long after the Debt Management Office (DMO) corrected Atiku’s outright lie on the legacy debt from the PDP era, his former principal opted to share false figures different from that of the recognised government agency which has records and details of all the national debt stock.

“Is it not shocking that a former President is depending on rumours rather than resort to publicly available records to back his criticism of President Buhari?

“More amazing is that he and his ilks keep talking of a high rate of debt servicing but forget that 70% of debts being serviced today were generated during the PDP years with little or nothing to show for them, apart from thousands of abandoned projects doting the nation’s landscape.”


The group also accused the former President of being hypocritical with his claim that the debt profile could bankrupt the country.

It said: “Here is a man who in the run-up to the 2019 election, was fully in support of his former Vice President whose economic blueprint centred around domestic and foreign borrowing to fund projects in his so-called “Get Nigeria Working Again” manifesto.

“Or is General Obasanjo saying he did not know that Atiku expressed his readiness to borrow to finance the budget deficit and to fund infrastructure in rail and roads?

“Today, both men have hypocritically made a 360-degree turnaround to criticise the Buhari government for doing this same thing with a more conscious plan to ensure that the loans are used for what they were meant for.

“For the avoidance of doubt, this administration is not seeking loans to fund recurrent expenditure like the former administration did in spite of a revenue profile of about N51trn from 2010 to 2015.

“All the loans, including the $29.6bn from the 2016-2018 borrowing plan are tied to specific infrastructural projects that could have been done by previous governments including that of former President Obasanjo.

“He doesn’t even seem to know that part of the loan was approved by the 8th National Assembly and is already being put to use on road and rail projects they were meant for.


“We wonder how the former President wants the country to bridge an infrastructure deficit that some experts say will require more than 30 years investment of over $30bn each year as a result of past neglect.

“And besides, the loans are for specific infrastructure projects that will not only yield repayment plans on their own but also serve as a catalyst for the development of the country.”


BMO urged Nigerians to ignore Obasanjo’s suggestion that the Buhari administration borrowed $71bn between 2015 and 2019 as well as his insinuations that the funds could.