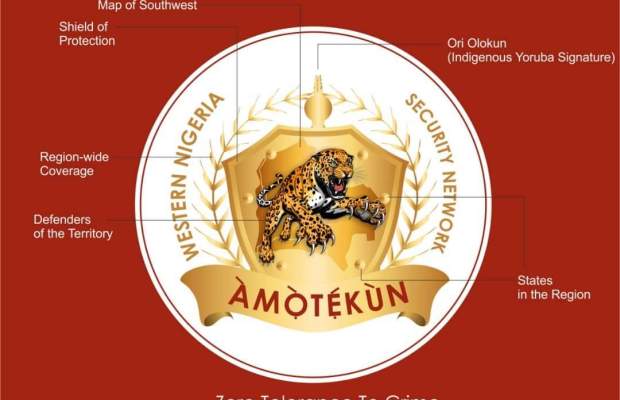 The Governor of Ekiti State, Dr Kayode Fayemi, on Monday received the draft copy of the proposed bill for the establishment of the Western Nigeria Security Network codenamed Amotekun in the state.

Receiving the draft from the  State Attorney- General and Commissioner for Justice, Mr Wale Fapohunda, in his office in Ado Ekiti, Dr Fayemi reiterated that the security network was designed to protect both indigenes and residents in the six states of the southwest.

The governor pledged commitment to facilitate the speedy discussion of the bill at the executive council meeting and its subsequent passage at the State House of Assembly.

Fayemi said the initiative was a logical extension of the community policing initiative recently assented to by President Mohammodu Buhari and which the Inspector General of Police had communicated to all the formation of police force across the country. He added that the bill would facilitated measures that would ensure “that our highways are free of banditry, of armed robbery, of kidnapping, of all forms of brigandage and criminality in our states.”

Fayemi said the six governors in the southwest considered it a point of duty to guarantee the safety and security of those that legitimately and legally reside in the six states of the southwest regardless of where they come from.

Hoping that the six governors in the Southwest would assent to the bill simultaneously on Friday, the Governor, disclosed that all the governors in the region have agreed with Speakers in the Assemblies of the six states to expedite action on its passage and subsequent accent into to law.

Earlier, the Attorney General and Commissioner for Justice, Mr Wale Fapohunda, revealed that the bill which was expected to be presented simultaneously by the six Commissioners for Justice to the various governors of the region, contained the operation guideline for the proposed security network agency.

Buhari Promises To Rescue Leah, Others Held By Boko Haram