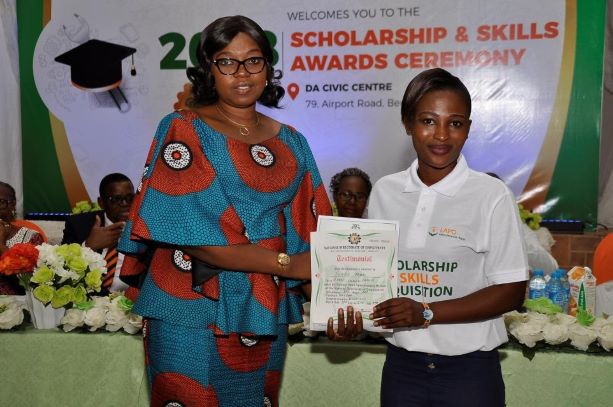 Nigeria’s leading micro-finance bank, LAPO MfB has honed itself leadership of the industry through developing high-level cognitive and non-cognitive/transferable skills, such as problem solving, critical thinking, creativity, teamwork, communication skills and conflict resolution, which can be used across a range of occupational fields.

There is plenty of global evidence that small businesses help to grow economies all over the world most especially during times of recession and periods of low growth.

This is why in 2016; LAPO MfB collaborated with National Directorate of Employment (NDE), National Business and Technical Examinations Board (NABTEB) and Ministry of Women Affairs (MWA) across the nation.

This was done to ensure that the same standard training centers are made available to our client’s children across the country in their respective communities enabling them to acquire national standard training and become future employers of labor.

A core part of this training sect is the promotion of female gender inclusion and empowerment to the girl / female child in order to engage in the promotion of small scale businesses. LAPO endeavors to pay for the cost of training and consumable on behalf of all clients children at no recourse to the client.

In January 2016 a successful pilot schemewas undertaken in Lagos and Benin which was extended to other States in Nigeria. In 2017 and 2018 respectively, those states include; Ondo, Kwara, Osun, Kaduna and FCT.The selection of nominees is carried out during the bank’s branch council meetings organized for branch customers and conducted in the same manner as the scholarship selection & balloting process.  The program runs concurrently with the scholarship program for the process of nominating awardees.