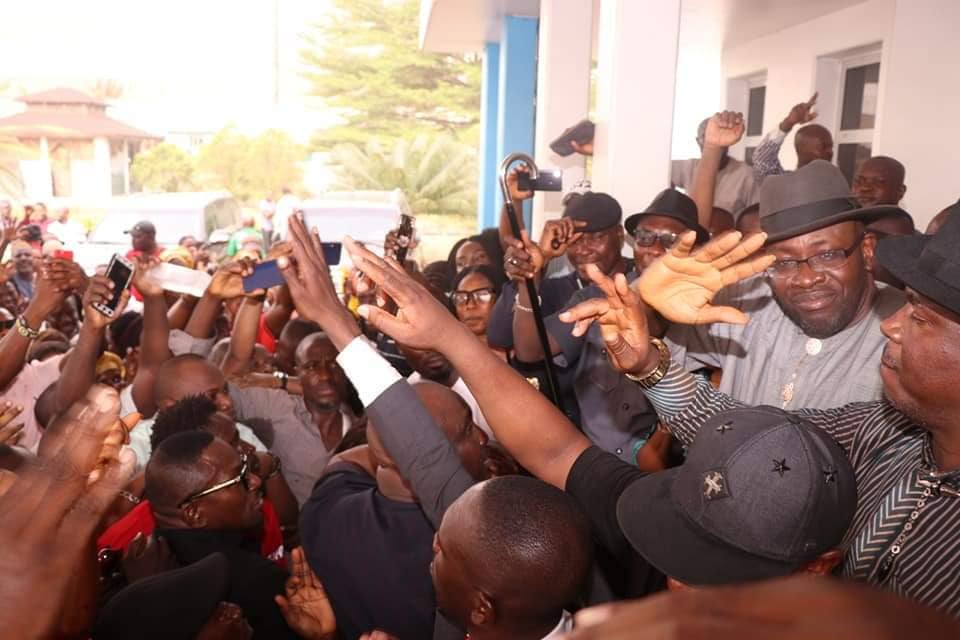 The outgoing governor of Bayelsa State, Seriake Dickson had just finished his spiritual devotion during which he sang with the choir ahead of his last cabinet meeting on Thursday morning as he sought God’s help to lead him through the valley of political solitude he was about to embark on.

However, minutes after the devotion his political horizon was totally altered as the Supreme Court judgment changed his political fortunes in the state he had ruled for eight years.

His demeanour and gait radically changed as the ghost of political oblivion that had stared him since the election declaration changed to unprecedented joy.

The governor burst into praise finding joy with the remenant of his political associates who were yet to desert him.

Indeed, Yenagoa, the Bayelsa State capital was on Thursday  locked down for several hours as jubilant Bayelsans celebrated the Peoples Democratic Party’s victory at the Supreme Court which  sacked the All Progressives Congress governorship elect, Chief David Lyon.

The judgment which came a few hours to the swearing-in of David Lyon, the APC candidate and Governor elect, elicited great joy and jubilation in the streets of Yenagoa.

A statement by the Chief press Secretary, Mr Fidelis Soriwei, stated  that the governor was making preparations to preside over a valedictory State Executive Council meeting when the news about the Supreme Court ruling filtered in.

According to the statement, cabinet members who were already seated at the Executive Council Chambers erupted in jubilation when the news of the PDP victory filtered in and out the session on hold.

The statement further noted that, prior to the ruling, Governor Dickson had just concluded his morning devotion with his religious team and choir of the  King of Glory Chapel, Government House when the news of the judgment came into the state.

Governor Dickson who was overjoyed joined the cheering crowd, dancing and giving praises to God.

They congratulated the PDP Governorship candidate, Senator  Douye Diri and his running mate, Senator Lawrence Ewhrudjakpor and members  of the PDP family for their abiding faith in the party.

According to Iworiso-Markson: “I heartily congratulate Senator Douye Diri and Senator Lawrence Ewhrudjakpor for this befitting victory, as the Supreme Court has once more demonstrated it’s uprightness and credibility.

“It is my deep conviction that Senators Diri and Ehrudjakpor will fulfill the  expectations and yearnings of Bayelsans, consolidate on the achievements of Governor Dickson  for a more prosperous state”.