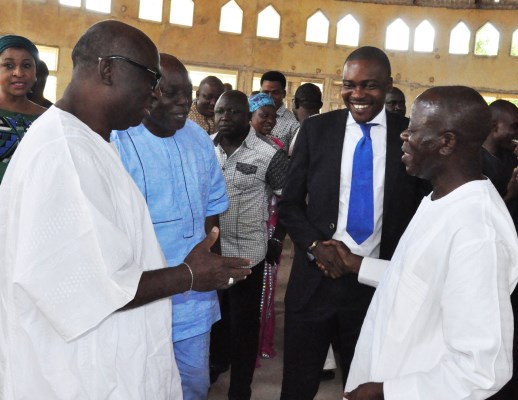 A stalwart of the All Progressive Congress (APC) in Edo, Mr. Peter Esele, has said that recent happenings in the party indicates that it is time for the National Chairman of the party, Adams Oshiomhole, to go.

Esele said this in an interview with the News Agency of Nigeria (NAN) in Benin on Sunday.

Esele, a former president of the Trade Union Congress, TUC was a collaborator with Oshiomhole in their days in the union movement.

He said, “In life, there comes a time when you must make a clear distinction between individual and institutional interests.”

He argued that Oshiomhole’s utterances about national issues had become a huge embarrassment to the party and the country at large.

Esele said that as the ruling party, APC must do all it could to defend the institutions of the state no matter the pain or interest.

“Failure to do so is a recipe for anarchy,” he said.

According to him, Oshiomhole cannot claim ignorance of the fact that the Deputy Governorship Candidate of the party in Bayelsa was ineligible to contest the election, which led to the Supreme Court’s verdict.

He alleged that “the incompetence and corrupt practices at the national secretariat” of APC had resulted in the weakening of various important internal processes for the selection of party candidates.

Esele said that the losses suffered from the flagrant abuse of the party’s internal workings had led to various court judgements against the party.

“States like Bayelsa and Zamfara now have to contend with governors the people never voted for,” he said.

He further said that APC had also been factionalised in Edo, with the alleged support of the national chairman.

“Neither faction will be able to fulfil the required provision of our party’s processes and protocol.

“APC has outgrown the kind of theatrics displayed by Oshiomole who, ironically, was also a product of court processes.

“The time is now to thank him for his services to the party and move on.

“Or, are we going to wail again, when the courts intervene to sack our candidate in Edo?

“There comes a time when you must choose sides.

“This is one of such critical moments, and I dare say that Oshiomhole has tried and it is time for him to go,” Esele, who was APC governorship aspirant in 2016, said.