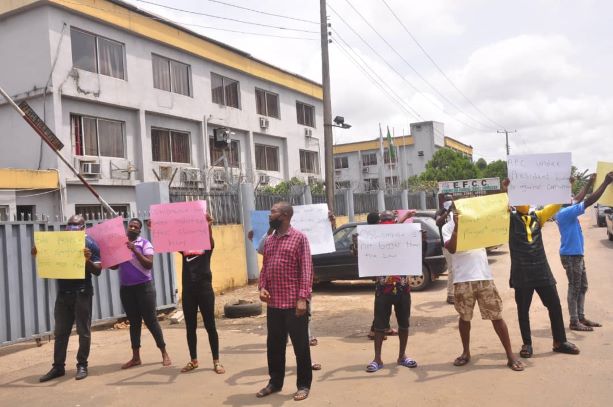 The faceoff between Godwin Obaseki and Adams Oshiomhole boiled over in Benin, the Edo State capital on Monday as rival supporters took umbrage over rival claims on the controversial Benin Specialist Hospital.

While a group of demonstrators stormed the Economic and Financial Crimes Commission, EFCC office in Benin with a petition for the prosecution of Oshiomhole over alleged irregularities in the award of the hospital contract, disparate groups, on the other hand, slammed Obaseki for rewriting history over the project.

The groups addressing newsmen in Benin-City alleged that Obaseki as a member of Oshiomhole’s executive council gave the go-ahead for the project and subsequently okayed the payments for the hospital when he became governor.

The anti-Oshiomhole group styled as the Alliance for Collective Progress, in their protest called for the prosecution of the former governor over their claim that his administration breached the state’s Public Procurement Law in the construction of the Edo Specialist Hospital and supply of equipment for the hospital.

Findings by the Justice James Oyomire (rtd) led-Judicial Commission of Inquiry indicted Comrade Oshiomhole over the circumstances surrounding the award of the contract for the construction of the hospital contrary to the state’s procurement laws.

Leader of the group, Mr. Nehemiah Omogiate, while presenting a petition at the EFCC said:

“The hospital in question was commissioned four years ago without equipment. The former governor mobilised the contractors with 75 percent of the contract sum, which exceeded the 25 percent mobilisation fees for contractors,” Omogiate noted.

The group called on the EFCC to commence a full-scale investigation into the alleged financial crimes in the construction and procurement of equipment for the hospital in the interest of justice and accountability.

The Head of Public Affairs, EFCC Benin Zonal Office, Williams Oseghale who received the protesters, advised them to submit a written petition to the EFCC for further action, adding, “I have heard you and I am going to take your message back to the management. I will advise that you also send us a written petition.”

While the group was at the EFCC office, a coalition of other groups including Youth Empowerment Advocacy and Good Governance Initiative (YEAGGI), Moses Oisakede Leadership Foundation (MOLF), Talakwa Parliament, National Union of Edo South Youths (NUESY) at a press conference slammed Obaseki for turning the hospital project into a political witch-hunt.

Comrade Idiogbe Solomon who spoke for coalition said that Obaseki as governor issued the Certificate of Completion of the project in 2018 and sat in the Oshiomhole cabinet as Economic Adviser when the decision to pay the contractor 75% as mobilization fee was taken.

According to him a number of Obaseki’s aides were also in the cabinet when the decision was taken.

“If he awarded the certificate of completion in 2018, at what point did he now realise that the project was shrouded in shady transactions? We see the accusations leveled against Adams Oshiomhole as indulgence in blackmail.