Obaseki Moves To Reconcile With Oshiomhole 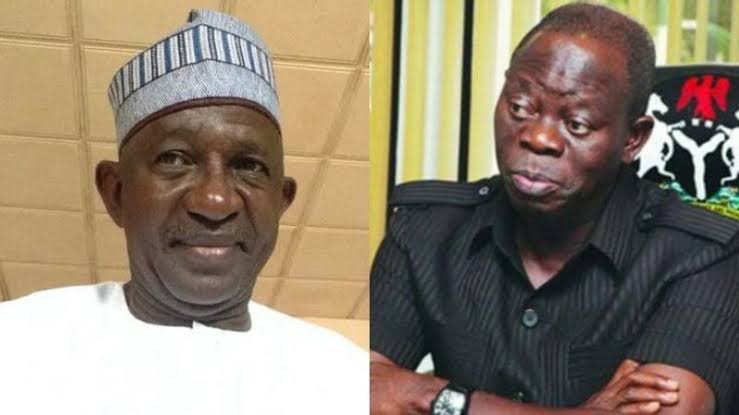 Senator Lawal Shuaibu, Deputy National Chairman (North) of the ruling All Progressive Congress (APC) on Wednesday dropped another bombshell warning that the national chairman of the party, Comrade Adams Oshiomhole was leading the party to self-destruct.

He said so especially in the light of forthcoming elections in Ondo and Edo States.

His assertion came against the background of what he claimed were Oshiomhole’s role in the party’s loss of seven states during the 2019 General Election.

The assertions came against the background of the May 27, 2019 memo issued by Shuaibu in which he first raised issues about Oshiomhole’s management of the party and called for his resignation from the office of national chairman.

That memo led to the indefinite suspension of Shuaibu by the National Working Committee, NWC, an action that Shuaibu claimed as illegal.

He, however, kept away from the party after the suspension until early March when the move to remove Oshiomhole reached a crescendo. His recall among other suspended officers became the quid pro quo that earned Oshiomhole a relief.

That agreement sources say was brokered by the late Chief of Staff to the President, Mallam Abba Kyari who was said to have been behind the anti-Oshiomhole camp and a serious backer for Obaseki’s second term.

One of the unstated resolutions from that agreement according to multiple sources was that Oshiomhole would allow Obaseki an easy route to the party’s re-election ticket.

Remarkably, once he returned to office and the national secretariat, Shuaibu’s first comments to newsmen was his assertion that Obaseki was deserving of the party’s re-election ticket.

However, with the death of Kyari and the apparent death of the pact with Obaseki, the duel for supremacy between the incumbent governor of Edo State and his predecessor seems to have taken another dimension.

So, when Shuaibu issued his statement on Wednesday with a pointed accusation against the apparent preparation by the party for the Edo State governorship primaries it was apparent that the national chairman and his deputy were clearly divided on Edo.

He said: “With regards to Ondo and Edo primary elections, there is already absence of transparency. The regulations issued that will guide the processes are already in violation of Article 20 (v) on page 76 of the APC constitution as amended where only the National Executive Committee is the only organ that SHALL approve such guidelines and regulations which includes the mode of nominating our candidates. I am crying for APC inside me!

Citing relevant section of the party’s constitution, he stated that recent appointment of Arc. Waziri Bulama as APC National Secretary was a nullity.

“There is nowhere in that same constitution where it was envisaged that an officer of the party could be appointed by the Chairman nor the NWC.

Hitting the nail on the head, he said, “Let me state unequivocally that any nomination signed by such acting National Secretary is a nullity and liable to be challenged by the opposition. Are we deaf and blind? Or is the Chairman finally out to inter the Party?”

Shuaibu spoke against the background of the party’s losses in Zamfara, Rivers and Bayelsa in 2019 where party administrative procedures nailed the party.

With his memo and the high stakes in Edo where the national chairman is determined to recompense the very man he broke the banks to implant just four years ago, it could well be a war of Mutual Destruction unfolding.