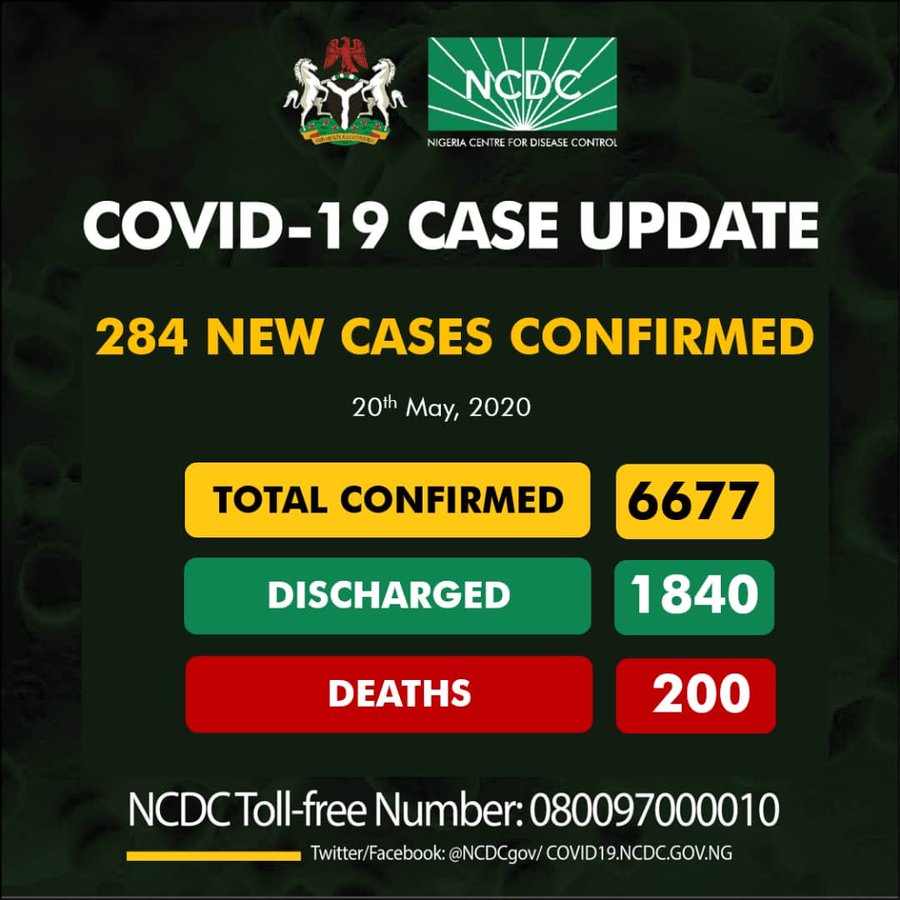 The Nigeria Centre for Disease Control (NCDC) on Wednesday recorded 284 new cases of COVID-19 in the country, bringing the total number of infections in the country to 6677.

The News Agency of Nigeria (NAN) reports that eight new patients have been confirmed dead to the virus in the country, bringing the total number of deaths in the country to 200.

The health agency explained that most of the fatalities recorded from COVID-19 were cases with other underlying illnesses known as co-morbidities.

NCDC said that the 284 new cases were confirmed in 13 states eight deaths were recorded in Nigeria as at May, 20.

The NCDC noted that no new state has reported a case in the last 24 hours.

The health agency said that till date, 6677 cases have been confirmed, 4637 Active Cases, 1840 cases have been discharged and 200 deaths have been recorded in 34 states and the Federal Capital Territory.

NCDC reports that on May 18, eight new cases in Zamfara State were erroneously announced.

“We apologise to Zamfara State  for this error and reiterate our commitment to accurate and transparent reporting of data,” it stated.

The health agency said sometimes, COVID-19 test results take longer than 96 hours due to sample transport and other logistics.

“Self-isolation is important,” it stated.

According to NCDC, the health agency said does not own quarantine or treatment centres which are the responsibility of the state governments or relavent teaching hospital.

The NCDC said that it only provides guidance on set-up of standard isolation centres, national case management guidelines and training to health workers.

Meanwhile, the agency said that since COVID-19 onset, it had proactively provided Nigerians with reliable information on what they know; also through its website- covid19.ncdc.gov.ng.

It called on the need for credible scientists in the country  to support in dispelling rumors just like the early days of HIV.

NCDC disclosed that there were many drugs in clinical trials ongoing as scientists work towards finding a cure for COVID-19.

It stated that some have shown promising results.

“Please avoid self-medication as it may lead to complications and death. Take medicines only as prescribed by a health professional,” it advised.