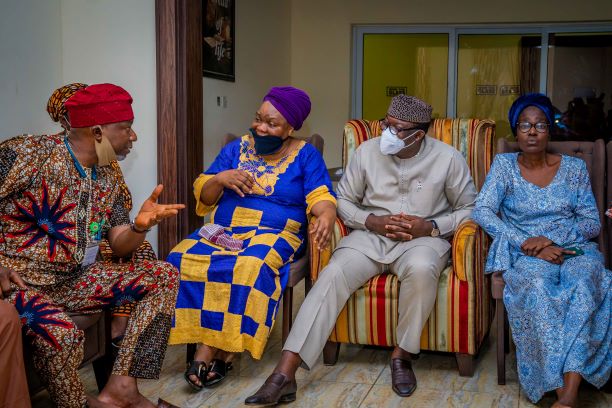 Ekiti State Governor, Dr Kayode Fayemi, has said that the governments of Ekiti and Ondo States would work out a modality to give a befitting burial to former Governor of the old Ondo State, Evangelist Bamidele Olumilua, who passed on Thursday, aged 80 years.

Dr Fayemi, who stated this when he paid a condolence visit to the family of the late Olumilua at his country home in Ikere Ekiti, said himself  and his Ondo State counterpart, Mr Olurotimi Akeredolu,(SAN), had commenced discussion on how best to honour the deceased and give him a memorable burial without breaching the Covid-19 protocols.

He said the governments of the two states would discuss with the family of the late former governor and agree on the burial arrangements, adding that the late Olumilua was a man of many parts who was governor of Ondo and Ekiti States at the time he was Governor between 1992 and 1993.

According to Dr Fayemi, Evangelist Olumilua spent 80 glorious years full of sacrificial services and commitment to his country home and the globe before breathed his last.

The Governor, who was received by the eldest son of the deceased and Ekiti State Commissioner for Information and Values Orientation, Aare Olumuyiwa Olumilua, the two wives of the deceased, Evangelist Bolatito and Barrister Oluwayimika Olumilua; family members and other sympathisers, described the former Governor as a man of peace, a man of purpose and a man of character who was dedicated to service of  the people, his community and God to the best of his ability.

Commenting on the political life of the Ikere born politician, Dr Fayemi said, “Evangelist Olumilua was integrity personified, compassion personified, a man of reputable character who reflected and represented the best of Ekiti in the numerous capacities that he served the state, the nation and the globe.”

He said Evangelist Olumilua’s death was not a loss to Ondo and Ekiti states alone but “a loss to Nigeria and the whole world, because he was a man of international standard.”

Governor Fayemi, who said the late Olumilua lived a good and fulfilled life, said the transition of the former governor should be celebrated and not mourned.

The Governor said: “I am not here to mourn, Ekiti people are here to celebrate and I can see Ekiti elders who are here as well, to celebrate with the family. Not that we shall not miss him, of course we will miss him.

“Baba has done well for us and we owe him immeasurably. Ekiti people would find most appropriate way to honour him, of course in conjunction with our brothers and sisters in Ondo State.

“But much more importantly, we like him for who he was, for the services he rendered, for his commitment to his people and we thanked God that he lived up to 80, and these were 80 glorious years.

Fayemi disclosed that the former Governor, during his lifetime served as Chairman of the Pilgrims Commission, Chancellor of the Ekiti State University, served under the United Nations as diplomat, as well as in the Organization of African Unity, OAU in Addis Ababa.

Fayemi wrote in the condolence register:  “A father in a million you were. You served well and we pray your soul rests in perfect peace. On behalf of my wife, Bisi, the government and good people of Ekiti State, we pray to God Almighty to take you into His bosom and also for your family to have the courage and fortitude to bear this irreplaceable departure. Adieu Daddy, Adieu!”

Earlier, Aare Muyiwa Olumilua, who spoke on behalf of the family, said his father lived a good and fulfilled life that calls for celebration instead of mourning. He thanked the Governor for finding out time to commiserate with the family.