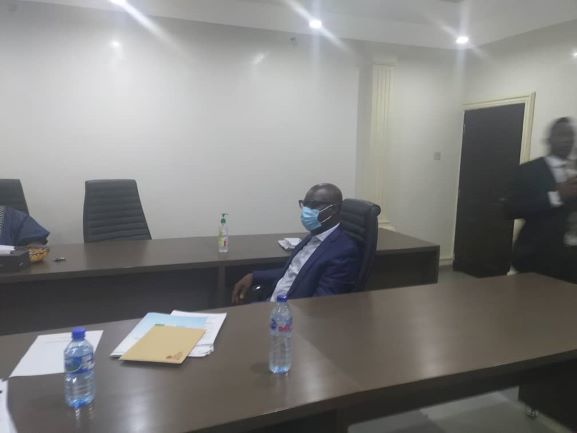 A day that started with high drama at the All Progressives Congress, APC national secretariat was ending on the same note with Governor Godwin Obaseki and four other governorship aspirants being screened for the contest.

At the end the governor said he did not expect to get justice from the party with his former godfather Comrade Adams Oshiomhole superintending the process.

The day started with claims by associates of the governor casting doubts on his readiness to appear before the committee on the claim that the party had been dragged to court and that he should not appear to give credence to illegality.

However, the governor turned around and surfaced at the APC national secretariat  just after midday but his appearance was momentary as the committee was not ready to receive him at that point.

However, the governor was forced to raise the alarm when according to him the committee did not respond to his calls on when to come back for the screening.

Speaking through his spokesman, Crusoe Osagie, the governor said the governor had arrived at the National Secretariat of the party early for screening but the committee was not ready.

According to him, “The governor arrived early but the screening committee was not ready. He was given the options to either wait for one hour or if he had an appointment to keep, he could go and call them to know if they were ready.

“The governor, who had a Nigeria Governors’ Forum (NGF) meeting, went for the meeting and called when he was done, but the members of the screening committee did not pick their phones.”

The committee, however, made way for him when he returned at about 8.00 p.m.

GWG gathered that the governor was faced with six petitions including one of playing anti-party with his decision to issue a gazette against the conduct of direct primary.

Speaking to newsmen after the screening late on Wednesday the governor said he did not expect to get justice with Comrade Adams Oshiomhole remaining as national chairman and superintending over the process.

“The last time I came here, I asked that Oshiomhole recuse himself from the process in the interest of peace and justice. But as a party man, I have had to go through the screening like everybody else.

“Since he is the judge and the jury in this matter, I will just wait for the outcome of the screening. I have given them all the information they need; the controversial certificate from the University of Ibadan has been tendered.

“Like I said, as a party man I have engine through the screening process but I do not believe that I will get justice because Comrade Adams Oshiomhole is an interested party in the Edo process.

“One of the questions that was asked was that why did I issue a gazette that will prevent the party from performing direct elections in Edo. That did I not see it as an anti party activity? I just felt that if we put politics above the the lives of the people of Edo State, the we may be missing the point.”

Mr. Matthew Iduoriyekemwen was the only aspirant yet to be screened on Wednesday night. His screening has been scheduled for Thursday.