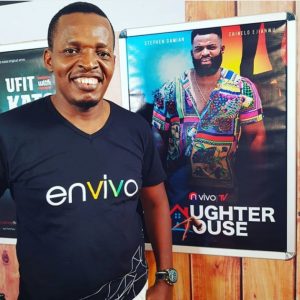 The movie director has also gone ahead to slam a N100 million suit against Ms. Akindoju.

Akindoju had on 5th June on her Instagram page alleged that the popular director raped a nameless and faceless actress.

The claim was made in a video format with written printing, narrating how the said incident happened.

The allegation has since gone viral on the internet with many trolling the film director.

Meanwhile, reacting to the allegation for the first time, Okpala  through his lawyers, Aghogho Akpojotor &Associates, has petitioned the Assistant Inspector General of Police, Zone 2, Onikan, Lagos, demanding for Lala Akindoju to physically produce the faceless actress to substantiate her claims as well as Police to launch a full scape independent investigation into the  allegation levelled against him.

Akindoju also shared a screenshot of a conversation, suggesting that Okpala raped the alleged victim on the popular WhatsApp group, Filmic.

In the letter dated the 8th of June, and signed by Barrister Aghogho Akpojotor, Okpala is urging the police to charge the matter to court after the conclusion of its investigation.

The letter reads in parts:

” It is therefore our humble prayer that the one credible means of clearing the image and restoring the reputation of our client which we hereby demand, is for the Nigerian Police to launch a full scale independent investigation into the  criminal allegations levelled against our client.’

“In this regard, our client is willing to surrender himself to the police and fully cooperate , work hand in hand with the police to ensure that these harmful untruth/malicious falsehood is seen as what it truly is.”

“Suggestively, in the most likelihood that Lala Akindoju is not able to physically produce the name and face behind the defamatory publication, and make available the needed body of evidence to substantiate her spurious claims, our client shall be demanding that Lala Akindoju / and her faceless alleged rape victim , be charged before the court of law as provided by our criminal justice law especially as captured by Section 24 of the Cybercrime (Prohibition, Prevention etc) Act 2015.’

” In the light of the aforesaid, we implore you to accordingly use your good office to investigate on the complaints and this matter be accordingly charged to court in the interest of justice, equity and good conscience , as the person , marriage , reputation and good standing of our client is been maligned.”

However, a visit to Lala Akindoju’s Instagram page, showed that the actress has pulled down the  controversial video.