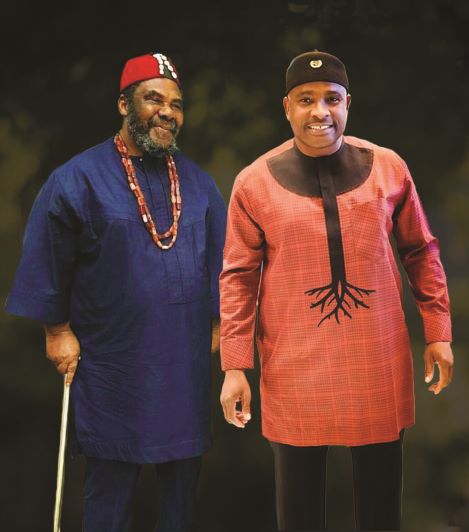 Veteran actor, Pete Edochie was in the spotlight once again after he was honoured with the African Film Legend Award at the just concluded African Film Festival, TAFF.

The festival, which ran from June 2, through June 6, in Dallas, Texas, United States, was screened live online. It was the first ever virtual award, and a trailblazing effort by the founder of TAFF.

However, due to ravaging Coronavirus pandemic induced lockdown, Edochie was unable to attend the four day festival. But  he did not miss anything as  back home, the veteran actor was presented with TAFF 2020 Living Legends Award Certificate by actress, Patience Ozokwor popularly called Mama G, in his residence in Enugu amid celebration.

Also, plans are underway  for the festival founder and film maker, Kelechi  Eke  to personally deliver Edochie’s trophy after the pandemic.

Speaking on why TAFF decided to honour Pete Edochie popularly known as Ebube Dike, this year with the Living Legend Award, Eke who’s also a  software engineer said  the veteran actor deserves the honour, having  contributed immensely  towards  the development of the African film sector in addition to bringing happiness and joy to many homes across the continent and beyond.

According to him, Pete Edochie  came into prominence in the 1980s after he played the lead role of Okonkwo in an NTA adaptation of Chinua Achebe’s all-time bestselling novel, “Things Fall Apart”, and since then,  the bearded actor has not looked back. At 73, he’s still active and ever busy more than the young actors.

Attendees enjoyed  the privilege of watching the festival selections in the comfort of their own homes as well as on demand. The film portal ROOTFLIX,  showcased  the selected films and the awards ceremony.

I Won’t Rest Until Uwa’s Killers Are Found – Adeboye