Mr. Obaseki And The Story Of Buhari's Endorsement! 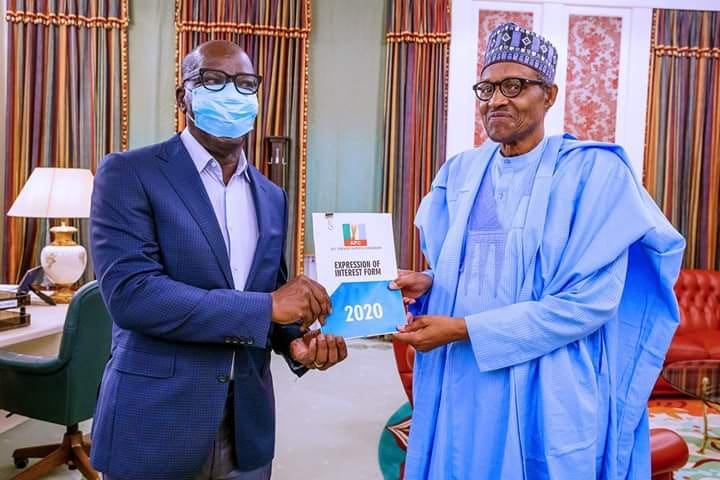 The day this supposed ‘endorsement’ picture of Governor Godwin Obaseki and President Muhammadu Buhari was published, the discerning few knew it was the beginning of the end for him. The president does not truly endorse anyone. He only takes those pictures for the optics. This is without questioning his understanding of a presidential endorsement in any capacity.

Running to Buhari is simply running in vain – a total waste of time. Hardly does he provide leadership in critical times, even when two allies of his fight to the finish, for as long as his PERSONAL interest is not affected, either directly or remotely.

Needless to say securing that audience with the president by Obaseki didn’t come easy. That it would end up a move without anticipated results needed no telling. Instances abound. For those who know the Villa politics, it is defeatist to seek Buhari’s endorsement in a political battle. It is even the more embarrassing when you give it needless media exposures.

What smart politicians do is leverage his name and office and then, peddle their own influence. You may want to ask again. After taking the picture and publishing it, for Buhari, it ends there. That’s if he gets to even see the published versions and the context of use. He would never consciously make any effort, either to follow up for you or stamp his authority, as the person seeking his face would have ordinarily expected.

Let’s just say these examples would suffice. When the Abdulahi Ganduje and Rabiu Kwankwaso feud newly started, a meeting of some government and party people, of not more than nine was conceived to constantly think up ideas for the government on how to move the party and government forward. It was during Buhari’s first term. Vice President Yemi Osinbajo and Chief Bisi Akande were also in attendance.

At the close of the meeting, which one of the attendees said achieved nothing, one person raised his hand to speak and was recognised by the president, who chaired the meeting, naturally. After addressing the imperatives of the meeting, he then spoke of the Ganduje/Kwankwaso feud and thought the president should play leadership, because his role as the father of the nation included looking after his subjects.

Buhari didn’t waste time. His response was swift and short: “Are they children? Next! And that was it. That also was the end of an initiative designed to offer some back channel supports for the administration and party. Needless to talk about the fact that Buhari never forgave Kwankwaso for daring to run for president in 2015.

Can you equally recall, when the president, in the thick of the Benue killings, asked former Inspector General of Police, Ibrahim Idris, who was insanely obsessed with former Senate President Bukola Saraki, to relocate to Benue and he did not? Do you remember the matter also became a national debate?

Two prominent Nigerians, who also held offices at the time, went to Buhari to express their concern and explain why he needed to show leadership by weighing in the principle of reward and sanction, at least, to show he was a no-nonsense person.

Again, his response was shocking as he tutored them on his definition of loyalty, albeit at the risk of national security. He (Buhari) said loyalty is in two ways. If you expect your subordinate to be loyal to you, you’re also expected to be loyal to him too and so, he would not embarrass him in public. The killings in Benue, therefore, took a back seat to protect his IG.

Oh, have you forgotten the Ogun State spectacle during the 2019 elections. In fact, the picture Buhari took with Senator Ibikunle Amosun and his candidate, Adekunle Akinlade was about the most beautiful at the time of the campaigns. O fine baje. But Buhari did not do more than obliging them the opportunity of a lifetime picture. Certainly, Senator Amosun and Hon. Akinlade would talk about that experience in their memoires later in life.

Therefore, if you have any challenge, Buhari is the least of your worries as a factor. He is not even interested. All he ever wanted was to be president and immediately that happened, every other thing is secondary. Perhaps, for the record, it’s okay to intimate him with the situation. But to seek his (Buhari’s) support and count substantially on him as the Commander-in-Chief is suicidal.

This is why it appears the other camp in the unfolding 2023 power game (because that’s what all this is all about) is doing well in their machinations while those on the other side appear helpless and badly beaten. Even where Buhari called the winning side and ran something by them with an instruction, they would not as much bother let alone carry it out, because he would not query their insubordination. They joke and laugh about his weakness in their locker room chats.

It is therefore a rudderless situation, which encourages survival of the fittest only. But the potentially functional pattern is, run with your own original plan; deploy your strategy to action; weigh in your influence; drop his name in as many places as possible and at the end of the day, concede to him the glory of the outcome. Welcome to Buhari’s idea and school of politics.

Obaseki announced yesterday that he would not seek redress within the party and by today, some reports stated he was seeking Buhari’s approval to run on a different platform. He has learnt nothing yet. Buhari again? Olodo ni man yi. He seems overrated to me and his dispositions so far have attested to this. Maybe I should also question his certificate?

Now, let’s get down to brass tacks. Obaseki hasn’t done well at all in his management of the many tendencies in Edo State, her politics especially. Yes, many people are not a fan of Adams Oshiomhole’s brand of politics, including this writer, but he took the biggest risk of his political career to make him governor, despite warnings from those who saw tomorrow.

There’s no debating the fact that Oshiomhole is more of a liability than an asset and in a gathering of 10 folks, hardly would you get three that could stand his guts, uncouth and largely primitive nature. But it is in those inadequacies that he fought your battle regardless and won. Ingratitude is awful and utterly indefensible.

Whatever happened, Obaseki mismanaged Oshiomhole. No doubt, godfathers are often highhanded with a lot of excesses. But all of that would end in eight years. Is that too much to wait? Those who misled former governor Akinwunmi Ambode also approached Babatunde Fashola and did even worse to frustrate him.

However, while one yielded to the larks of political jobbers and destiny destroyers in Lagos to feather their own nest, the other refused to be distracted. Today, the gainer and the loser must be doing a lot of introspections by now and thinking what they had done right and wrong, although the opportunity is forever missed.

One of those, who approached BRF at the time once confided in this reporter and described the governor as incredibly timid in his frustration. But for BRF, what did he stand to gain in destroying his benefactor, no matter his excesses? That’s the distinguishing factor in what the Yoruba call an Omoluabi.

Truth be told, it is not likely Obaseki stands a good chance, even in a free and fair election against Pastor Osagie Ize-Iyamu and this is in all the boxes of considerations. In fact, grapevine had it then that the pastor, who despite his calling also controls the streets, actually won the 2016 election. Well, INEC’s result didn’t say so. Yet, Ize-Iyamu’s candidacy also comes with a lot of moral burden, no thanks to Oshiomhole.

So, what are the options before Obaseki? If he stayed behind to exhaust all the internal party mechanisms to seek redress, it is possible – just maybe – that the Zamfara scenario might replay itself and that would mean conceding the state to any of the opposition parties.

But if he chooses to call the bluff of the party, because he does not have confidence in its capacity to deliver justice and moves to another party, then, it’s game over. Ize-Iyamu would defeat him hands-down, coupled with the instruments of state that would be deployed heavily in his support. Buhari didn’t have to know that.

This is why Obaseki should probably read this. In APC versus Engineer Suleiman Aluyi Lere (2020) 1 NWLR (Part 1705) 254, Justice Rhodes-Vivour of the Supreme Court stated,”Candidates are expected to obtain expression of interest and nomination forms, present their certificates for verification and appear before a Screening committee.

“This is the stage at which the domestic or internal affairs of the political party are not justiciable. The courts will not dabble into how a member of the party is screened, or why a member was not cleared by the party to contest the primaries!

“Put in another way, before a member of the party is cleared, the party has the power to disqualify their member, and is answerable to no one including the courts. A dissatisfied member’s remedy is to leave the party and seek his political ambitions somewhere else.”

Thus, not seeking redress, first from the party, is a personal decision by Obaseki, which automatically closes this matter. And if he thought Buhari would support him on another platform, then, ask Buhari’s political son, Senator Amosun. It would be your biggest delusion. In fact, it is easier for him to hide behind not wanting to be seen as encouraging anti-party and ‘watch you die a painful political death’.

The option of staying behind to fight it out appears the most plausible, even though it is utterly uncertain and may not be rewarding at the end of the day. But you can also take your chances by moving on. It’s within your right, at least, if you feel you are that popular. However, remember, Ambode too was told he was the real deal, coupled with the fact that as a Lagos governor, he had an intimidating war chest to fondle with.

In the final analysis, and from an objective standpoint, maybe it is time to give up the fight and walk away. It could be devastating suffering huge losses in both ways – spending so much money and still losing the election.

You see those people telling you it is doable? All they want is their share of the money as fast as possible, because they can tell already the end is nigh and desperate governors dip their hands carelessly in state’s purses. So, why not save all of those monies and take a bow. It’s game over, sir, Governor Obaseki!

Protests In Benin Over Obaseki’s Disqualification