Protests In Benin Over Obaseki's Disqualification 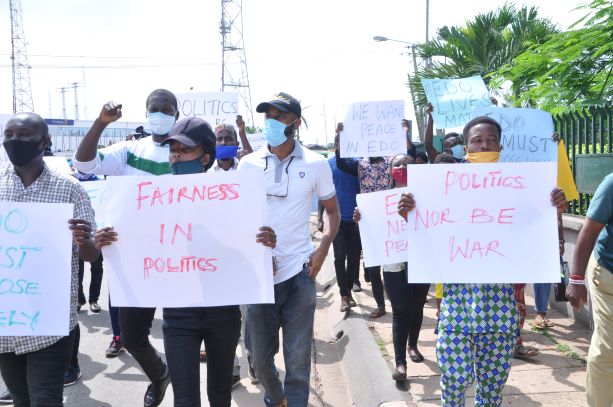 A coalition of civil society groups in Edo under the aegis of Edo Civil Society Coalition for Peace and Development at the weekend led a ‘Peace Walk’ to promote peace and campaign for an end to godfatherism in the state.

The groups further expressed worry over the rising political tension in the state, noting their displeasure on the outcome of the All Progressives Congress (APC) Governorship Screening Committee which disqualified the incumbent governor, Mr. Godwin Obaseki.

Speaking on behalf of the coalition, Comrade Batholomew Okoudo, frowned at the political crisis and fisticuffs among the ruling party’s stakeholders, calling for peace and unity in Edo State.

Okoudo, who condemned the party’s decision for a direct primary and called for an end to godfatherism in the state, said the life of Edo people is more important that the selfish ambition of any politician.

He added, “Those in positions of authority must ensure that the interests of the people are considered. Those in charge of the primary should be peaceful rather than hijacking the situation and process, putting the lives of all Edo people in danger.”

Mr. Obaseki And The Story Of Buhari’s Endorsement!