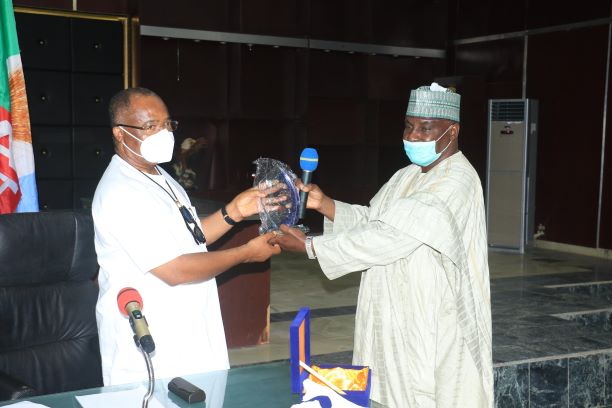 Governor Hope Uzodimma of Imo State has been inducted into the President Muhammadu Buhari Integrity Hall of Fame.

Governor Uzodimma’s induction was sequel to recommendation of the Research and Documentation Section of the Arewa House, Ahmadu Bello University, Zaria, established in honour of late Saduana of Sokoto who was noted for exhibiting a high level of integrity as a leader.

The investiture, which took place at the Mbakwe Exco Chambers, Government House, Owerri, at the weekend was performed by the Director of Arewa Hall of Fame, Prof. Ibrahim Muhammed and the leader of the team, Alhaji Salmon Salami in the company of other members.

They described Governor Uzodimma as “champion of change and integrity, epitomizing the character of President Muhammadu Buhari.”

In their testimony about Governor Uzodimma, they described him as a “man of honour and champion of integrity and a golden gift to the people of Imo State who has the opportunity of doing the wrong thing and getting away with it, but decided to do the right thing as a mark of  integrity.”

In their words: “Hope, you are gold. Hope, a champion of change. Hope, a special man.” “It is a lifelong opportunity,” they added. The group placed Hope Uzodimma side by side with late Sam Mbakwe, the first civilian Governor of Imo State.

They emphasized that, for the Governor, “the road is good and clear, God is merciful to him, the beginning is good and the end will also be good,” adding that “he will enjoy the grace and mercy of God.”

Receiving the award, Governor Uzodimma acknowledged the award as an uncommon gift and said that he is overwhelmed at his induction into the President Muhammadu Buhari Integrity Hall of Fame, particularly going by the processes of identifying and choosing him for the honour.

He described the induction as not only symbolic, but also one that means a lot as it is coming from the intellectual group that is non-partisan.

The Governor added that he is convinced that, with the recognition, peace, progress and integrity can jointly be brought to Nigeria.