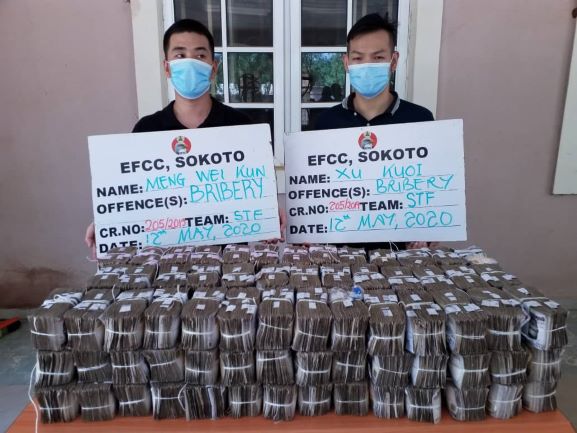 Lawyers to two Chinese:  Meng Wei Kun and Xui Kuoi of China Zhongao Nigeria Ltd, accused of offering a N100 million bribe to the Zonal Head of the Economic and Financial Crimes Commission, EFCC have withdrawn their services.

The withdrawal of the defence lawyers, Ahmed Raji and Co. caused the trial of the two men scheduled to beging on Monday, June 15, 2020 before Justice Muhammad Sa’idu Sifawa  of the Sokoto State High Court, caused the trial to be shifted to June 29,2020.

The defendants are facing prosecution by the Economic and Financial Crimes, EFCC, for allegedly offering to bribe the Sokoto Zonal Head of the Commission, Mr. Abdullahi Lawal to the tune of N100,000 (One Hundred Million),  out of  which  a part payment of N50,000.000.00 (Fifty Million Naira) in cash was offered on May 12, 2020.

The suspects were promptly arrested by officers of the Commission.

China Zhongao Nigeria Ltd, a construction firm, is being investigated by the Commission in connection with the execution of contracts, awarded to it by the Zamfara State Government for the construction of township roads in Gummi, Bukkuyun, Anka and Nassarawa towns of the state; and also for the construction of 168 (One Hundred And Sixty-eight) solar-powered boreholes in the 14 local government areas of the state, valued at N50 billion (Fifty Billion Naira) between 2012 to 2019.

Worried by the consistency and professionalism in the investigation of the case,   the two defendants reached out to Lawal on behalf of the company,  with an offer of N100 million (One Hundred Million Naira) bribe so that the matter would be swept under the rug.

They were  arrested  and later arraigned on Friday, May 15, 2020 on  two-count charges of conspiracy and offering bribe to a public servant to the tune of N100 million.

The new defence counsel, Abdullahi Omoloye, prayed the court for a two-week adjournment to enable him prepare adequately for the trial.  Justice Sifawa adjourned the matter till June 29 and 30, and July 1 and 2, 2020 for commencement of trial.