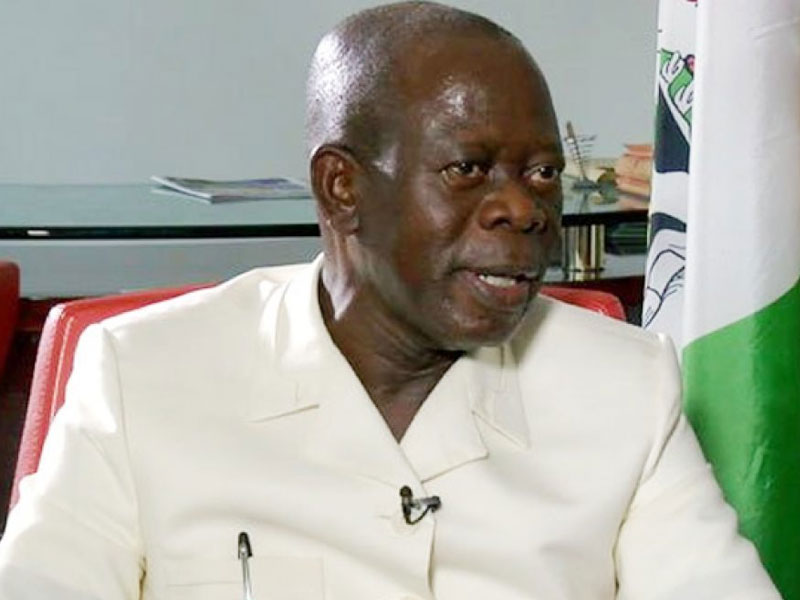 Comrade Adams Oshiomhole was in a very awkward position on Wednesday night when he was asked if he would appeal the Court of Appeal order that suspended him as chairman of the ruling All Progressives Congress, APC.

Oshiomhole who spoke to Channels Television a day after the shocking suspension, was surprisingly muted in his response. It was an unusual interlude for a man not normally known to be hard for words concerning his rights.

The reason for his awkwardness was, however, evident to the discerning.

Just a week earlier at the height of his powers in the APC, he had designated the National Working Committee, NWC headed by him as the Supreme Court which would have the final say on issues concerning the nominations for the party’s ticket in the forthcoming governorship election in Edo State.

As the chairman of the NWC, he had as such taken the toga of Chief Justice of the APC’s Supreme Court.

It was perhaps in that role as Chief Justice that comrade passed his judgment disqualifying Godwin Obaseki from the APC primary.

Oshiomhole’s judgment against Obaseki, however, came even though there was no case or appeal before him.

Indeed, unlike Oshiomhole who was in contemplation as to approach the Supreme Court on his suspension, Obaseki was not in any way double-minded about appealing to a higher court in the APC on his disqualification.

His stance was upon what he claimed as the bias against him under the Oshiomhole leadership of the party.

But how Oshiomhole was able to supposedly position himself to ridicule a governor as Obaseki alleged flowed from the seeming vacancy in the true leadership of the party.

That is, Oshiomhole could position himself as the chief arbiter in the party because of the apparent indecision of the president on issues pertaining to the ruling party.

All through the crisis, President Muhammadu Buhari has surprisingly kept aloof.

After the shocking revelations of the dispute within the first family and the also shocking silence of the president, Nigerians can hardly be shocked as to why the president has kept quiet on the troubles in the party.

If he didn’t respond or assert himself when it came to the crisis within his family, few would be shocked with his silence on the issues troubling his political party.

It indeed beggars belief that party members have been asking or pleading for the president to intervene. Does he need to be told?

The fact is that Comrade Oshiomhole could vest himself and the NWC as the Supreme Court of the party essentially because the real Supreme Court, to wit, the National Executive Committee, NEC has failed to hold meetings and ratify decisions that ordinarily should have been ratified.

Under the APC’s constitution, the NEC is supposed to meet quarterly. However, since the enthronement of the present administration, the number of NEC meetings can be counted on the fingertips.

Even more, the board of trustees of the party that should weigh in as to provide moral fibre to party decisions has not been inaugurated almost seven years since the party was established.

As the highest political office holder in the party, President Buhari ordinarily should provide that moral compass for the party and its leadership. But alas for reasons still unfathomed he is either incapable or unwilling.

It is no surprise that Oshiomhole entered the fray to provide his own kind of direction.

We now know that when the late chief of staff, Mallam Abba Kyari intervened in March that it was not based on the directive or with the imprimatur of the president. Had it been so, the agreement brokered by Kyari between Obaseki and Oshiomhole would not have so easily collapsed days after Kyari died.

When pictures and videos of comrade undergoing punishing physical tests in the gymnasium only few days after Kyari’s death, many did not link the exercise to comrade’s preparation to battle Obaseki.

Oshiomhole’s seeming restraint, when asked about the Supreme Court, could also have flowed from his realization of how fate played a hard one on him.

Even more, the former governor of Edo State would also have come into understanding of the global permutations working against him.

Oshiomhole has not just made enemies to himself in his administration of the party, he has also positioned enemies of the national leader of the party, Asiwaju Bola Ahmed Tinubu as his own enemies.

Where President Buhari stands in that conflict is what needs to be fathomed.