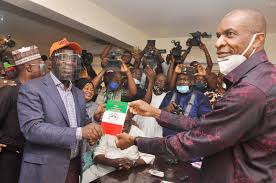 Amidst the increasing cases of COVID-19 in the country, the large crowd that came to welcome the Edo State Governor, Godwin Obaseki on Friday to the fold of Peoples Democratic Party, PDP, defiled the physical distancing order of the Nigeria Center for Disease Control, NCDC and violated the COVID-19 regulations gazetted by the governor.

Obaseki, on Friday, formally defected to the PDP at the PDP Secretariat located at 1st East Circular Road, Benin city.

His defection was witnessed by a large turnout of supporters, leaders and sympathetizers, amidst cheers and solidarity songs.

Amidst the celebration that trailed the governor’s defection, the physical distancing order of COVID-19 protocol stipulated by NCDC were totally neglected, as the PDP Secretariat, was full to the brim with supporters, causing traffic gridlock at the popular 1st East Circular Road.

The crowd that welcomed the governor clustered together, without the two meters distancing and many were without their face masks.

The car that conveyed the governor to the PDP Secretariat was surrounded with supporters chanting “4+4”, as it took the intervention of the body guards to wade off the supporters from touching the governor.

Even though the governor was putting on a face shield, many of those who were present in the office of the Edo PDP chairman, Tony Aziegbemi office, where the governor collected his PDP membership card were without their face masks, and clustered together. A flagrant disregard for the COVID-19 protocol stipulated by the NCDC.

The same scenario played out when the Edo state deputy governor, Philip Shaibu came to the PDP Secretariat, shortly after the governor had left, to collect his membership form.

Recall that the Edo state government gazetted COVID-19 regulations placing a ban on political and social gatherings of more than 20 persons in the state, warning that violators will face stiff penalties.

The move, according to the governor, was informed by the insights from an epidemiological study conducted by researchers at the University of Benin Teaching Hospital (UBTH), that COVID-19 cases in the state will reach its height in the third week of June 2020.

In the regulations, any political gathering of not more than 5,000 people should take place at the Samuel Ogbemudia Stadium, Benin, subject to the approval of the government.

However, the regulations were seen by many political critics as an attempt to frustrate the direct mode of primary election adopted by the National Working Committee of the APC, the former party of the governor before his disqualification.

Friday’s defection ceremonies at the PDP Secretariat in Benin city is an irony for the COVID-19 regulations gazetted by the governor.

The governor and his supporters that were at the PDP Secretariat formed a political gathering of more than 20 persons. In numbers, they were more than 1,000 who came to welcome the governor.

In the real sense, the governor and his supporters violated the Edo State COVID-19 regulations gazetted by him.

Obaseki Leaves Many Mines For Oshiomhole In APC