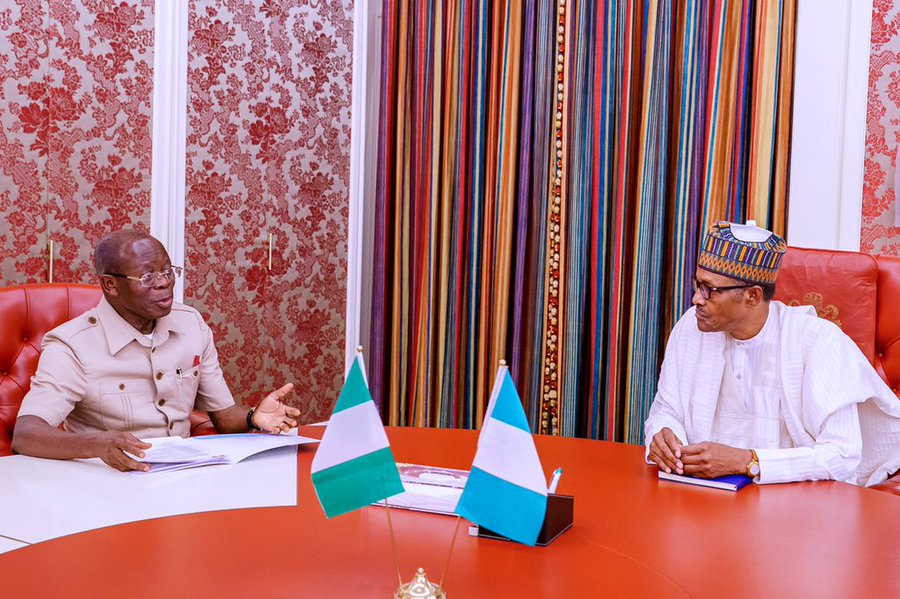 The question as to whether President Muhammadu Buhari and other members of his inner team were justified in humiliating Comrade Adams Oshiomhole out of the office of national chairman of the All Progressives Congress, APC is one that will endure for some time.

After lending himself to the ferocious campaign that returned Buhari to office, Oshiomhole was easily dispensed with, in a way that was not contemplated against any of his two predecessors. Yes, Chief John Odigie-Oyegun was with Oshiomhole in tow, spitefully stopped from a second term, but he completed his first term.

Oshiomhole, however, suffered worse indignity in the sense that he was not even allowed to attain up to half of his four-year term.

Indeed, your correspondent has been appraised on how the last move against Oshiomhole was about the last of several attempts in the past. At least three of those attempts in November 2019, March 2020, and the last successful attempt all had significant prodding from within the president’s inner circle.

After being given the mandate to initiate the moves to remove Oshiomhole, the operatives were embarrassed as the Villa repeatedly removed the carpet from under their feet. The last move in March was particularly embarrassing.

The adventurists had scented victory; the Court of Appeal had put Oshiomhole’s matter off indefinitely. They were shocked to hear that same day that the court allegedly on the prompting of a very high official in the Villa reconvened to reinstate Oshiomhole.

But the Oshiomhole chairmanship was a disaster long foretold.

But was it right to use him for second term and dump him so resentfully after his grueling campaign outings?

That is a moral question that political practitioners hardly bother themselves with.

If anything, those who campaigned with Oshiomhole to enthrone change in the country using the APC as vehicle may have now come to the conclusion that after five years in power that the APC has not produced the change they promised.

If any, in the matter of impunity, the APC even fares worse with the party failing to hold regular meetings and such.

Oshiomhole was chased out of office in the same way that the majority of PDP national chairmen were chased away.

However, Oshiomhole’s role in bringing about his downfall must also be examined.

One may overlook the probable claim that it was retribution from Chief Tony Anenih hitting at Oshiomhole from the grave. Some would also rightfully guess that the House of Igbinendion, papa and pikin, were behind the moves after Oshiomhole spat on them after helping him to power?

So, if the law of karma is set aside, but the former chairman’s impunity will not be forgiven.

When he was suspended whether justifiably or not, Comrade should have immediately addressed it. However, just as a politician who descended from the top and operated at the top, he rather neglected to address the issues at home.

Newspaper executive, Mr. Chuks Akuna who was a close friend of the late Chief A.K. Dikibo told your correspondent an interesting story of how the late PDP chieftain addressed almost a near similar situation.

Dikibo had some time in 2003 boarded a plane in Port-Harcourt. As he sat waiting for takeoff, a fellow passenger walked to him and whispered to him about mutterings in his ward in Okirika, asking him when last he visited.

Dikibo replied that he was there two weeks ago, but his fellow passenger told him of muttering at the ward.

There and then, Dikibo aborted the journey and proceeded to Okirika where he met his ward chairman, asking him ‘hope everything is fine.’ The ward chairman muttered that it had been difficult to reach him on phone.

He told him of how he needed N100,000 to address a particular family situation. Dikibo responded by giving the ward chairman, N200,000 and then returned to Port-Harcourt before coming back to Abuja.

The fact that every politics is local is one that Oshiomhole easily scorned.

His entry into the politics in 2006 was from the top through the Igbinendions and Pastor Osagie Ize-Iyamu. Albeit, his national reputation as a successful labour activist may have helped him. However, the niceties of dealing with politics at the local level were not transmitted to him hence when Godwin Obaseki set trouble for him at home, he overlooked it to his cost.

Another development from the removal is the power of the president in determining party positions.

The Thursday NEC meeting was attended by many associates of Aswiaju Bola Tinubu who were known supporters of Oshiomhole.

However, the president did not give them any room to defend Oshiomhole. In our presidential style of politics once the president sets the tone as he did on Thursday everyone else takes the cue. Unfortunately, none of the officials at the NEC raised the issue of how Victor Giadom as a Deputy National Secretary became acting national chairman even with Senator Lawali Shuaibu, available as Deputy National Chairman (North).

The import of the development on Thursday as has been variously reported and commented upon is the decapitation of Tinubu’s political clout in the party.

It may be more than that. Buhari has with it set the tone for 2023 politics; how he will be replaced and who will NOT replace him as president is now emerging.

Capt. Hosa: Of Diligence, Honour And Other Matters