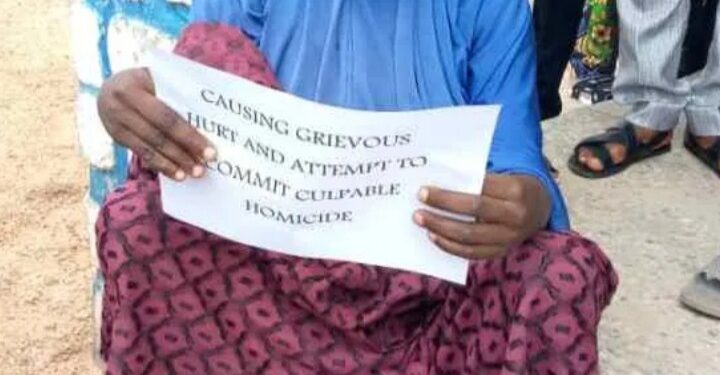 A 32-year-old pregnant housewife, Mrs. Halima Ali has blamed hot temper for her action in cutting off her husband’s penis.

Mrs. Ali of Tella village, Gossol Local Government Area of Taraba State committed the act on July 1 while her husband slept. They had quarreled the previous day over what she claimed was her husband’s unfaithfulness.

The suspect was paraded on Wednesday by the police in Taraba which have charged her with causing grievous bodily harm and attempted homicide.

Her husband, Ali Umar who married a second wife three years ago is recuperating at the Federal Medical Centre, Gombe with the prospects of using his sexual organ again hanging in the balance.

The Taraba State police command Public Relations Officer, Mr David Misal, on Wednesday told newsmen that Mrs. Ali on July 1 cut off one her husband’s genitals with a knife after a quarrel a day before the incident.

Speaking on her action, Mrs. Ali who has been married to the victim for ten years and has four children with him accused the husband of being unfaithful and her high temper for her action.

“He knows I am very hot-tempered since we got married in the last 10 years it has been from one quarrel after another, people have always tried to come to settle us but (they) have not been successful.

“When I heard that he was cheating on me the devil entered into my heart and I cut off his genitals, we have four children already. I am calling on my fellow women not to be too hot tempered,” she said.

The husband who spoke on telephone from his hospital bed said: “I was asleep when my wife, Halima, sliced off my penis, It is so sad that the wife I got married to choose to end my life this way, right now I just want to get well and move on with my life, I also wish members of the public could come to my aid to pay my hospital bills,” he said.

He said the wife became more troublesome ever since he took a second wife three years ago.