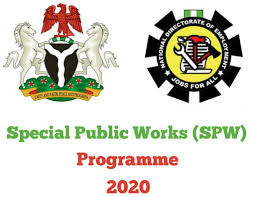 Two persons have been arrested for allegedly  duplicating forms meant for the Federal Government Special Public Works ( FGN SPW) programme and selling them to the public  in Akwanga Local Government Area ( LGA) of Nasarawa State.

The Chairman of the State selection Committee , Hon Dr Kassim Muh’d Kassim disclosed this on Thursday in Lafia while briefing Journalists immediately after monitoring the exercise in Akwanga, Nasarawa Eggon and Lafia LGAs of the State.

According to him, the two persons were arrested in Akwanga LGA for defrauding people and selling the forms , saying they have been handed over to the Police for further investigations.

“We have a case of two persons in Akwanga local government area of the state who were selling the forms to unskilled youths at the rate of N2000 each and the suspects have been arrested by the  Divisional Police in Akwanga.

“As the chairman of the committee, I  was directed not to allow politicians  hijack the programme, denying   the youths  who are  the targets of this Programme ” he said.

He warned that the forms for the Registration were not for sale, therefore anybody caught selling them would be made to face the  full wrath of the law.

In their separate  interviews with GWG,  beneficiaries of the programme expressed appreciation to President Muhammadu Buhari for initiating the programme which is  aimed at alleviating the sufferings of the youths in Nigeria.

Miss Naomi Danlandi , a 400 level student at the Nasarawa State University,  Keffi who hawks banana in Gudi, Akwanga LGA thanked the president for the gesture.

“I hawk banana from Monday to Saturday to enable me pay my school fees and some times I go with N 3,000 depending on how people buy  in a day.

“I am  very grateful to the Federal Goverment for this initiative, it  will assist me in  expanding  on my business,” she said

Another,  Miss Mabel Josiah who is a  graduate from the  Nasarawa State Polytechnic  Lafia said: “I am very excited because it is not my wish to hawk cashew nuts  by the road side  but  because  I don’t  have a  job so I decided  to look for something doing that will keep me  going financially.

“This Programme of the federal goverment is going to impact on our lives positively especially for us who do not have government jobs and I want to advise the youths not to wait on goverment for white collar jobs,  they should start something on their own so that any support  from the goverment  will help them to build  on what they had established already and   expand on it,”she concluded.

GWG reports that 13,000 youths and women in the state are to benefit from the 774,000 volunteers Special Public works Programme of the federal government which will run from October to December , 2020.