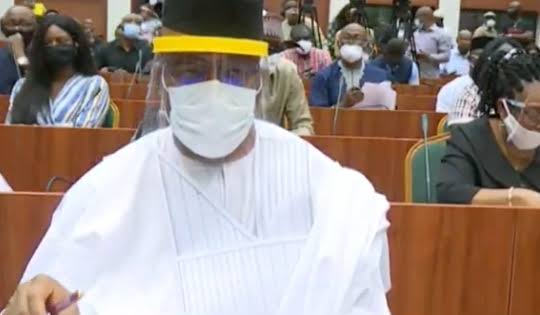 The House of Representatives has come hard on the Minister of Niger-Delta Affairs, Senator Godswill Akpabio, saying his reply to ultimatum issued to him is diversionary.

Akpabio had under oath alleged that 60% of all the NDDC projects under investigation were awarded to members of the House between the months of January and May 2020.

In reply, the leadership of the 9th House issued a 48-hour ultimatum to the Minister to publish a list of the legislators allegedly awarded 60% of the entire projects of NDDC between January and May 2020.

The Minister subsequently sent a private letter to the Speaker, Femi Gbajabamila detailing those awarded contracts by the NDDC.

In a press statement on Tuesday, the house through Spokesperson, Hon. Benjamin O. Kalu, rejected Akpabio’s letter saying it was irrelevant and had little to do with the bogus claims he made.

The statement said further that the House will take legal actions if the Minister does not clear the doubt and wrong perception.

The statement said: “The House therefore reiterates that the Minister was given an ultimatum to publish names and not to write a personal letter to the Speaker. The Honourable Minister is hereby cautioned to desist from spinning tales and is invited to go public as instructed.

“It is also instructive for Nigerians to note that the total number of projects in the 2019 NDDC budget was 5959 out of which 5416 projects were rolled over from 2018, which the 9th Assembly obviously had no influence or control over. Therefore, unable to prove his claims, the Minister presented an ineffectual spreadsheet of only 266 projects out of which about 20 projects were attracted by past members of the National Assembly as constituency projects, not as contractors, but in furtherance of their representative mandate.

“The projects presented in the Minister’s letter are not within the scope of the investigation and do nothing to address the leadership’s ultimatum for him to publish the list of names of the members who he claimed took 60% of NDDC projects from January to May 2020.

“Also, contrary to the mischievous narrative being peddled on the internet, the only mention of the Chairman of the NDDC Committee of the 9th House of Representatives, Rep. Tunji Ojo in that letter, was as to his alleged request for the complete payment of 19 contractors who had approached him with complaints over NDDC’s non-payment for their services. This is however, an allegation which has been completely refuted by Rep. Ojo and for which there is no evidence linking him.

“The one member of the House mentioned in that letter only attracted the project to his federal constituency, in the same manner that the NDDC MD, EDFA, EDP, Chairman etc applied to the Commission for attention to the needs of their people and were obliged. This attraction of projects does not in any way mean that contracts were personally awarded to them.

“Additionally, the letter also listed the names of contract awardees with no evidence linking them to those who attracted the projects to the beneficiary communities. It takes lifting the corporate veil for the directors to be seen and the Corporate Affairs Commission is there to establish who the real owners of the companies are. Until then, it is wrong to attempt to establish a nexus which currently does not exist. The document remains a mere spreadsheet of people who attracted projects to their communities in furtherance of their representative functions.

“Furthermore, the directive to press charges against the Minister has not been lifted by the House as the leadership is busy considering the weight of the Honourable Minister’s letter. If it does not clear the doubt and wrong perception, it will be sent to the court for clearance as the Speaker stated.

“Once again, the letter’s annexures showing 2018 projects have no relevance to what was requested from the Minister because it was outside the scope of his claims, it was also not comprehensive but selective by mentioning only one current member for attracting projects to his constituency and not for receiving contracts. The House is mindful of a letter currently before it where the Minister also applied to attract several projects to his Senatorial Zone during his time at the Senate, does it mean the contracts were awarded to him?

Ondo Dep Gov Reacts To Reports On His Rejoining APC