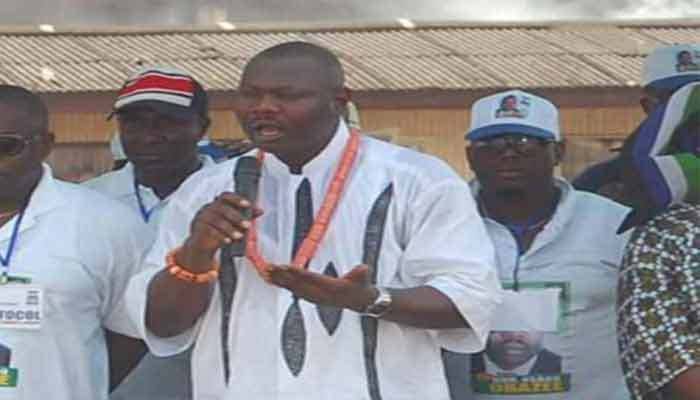 All Progressives Congress (APC), Hon. Osaro Obazee, has accused Governor Godwin Obaseki of blackmailing him and billionaire businessman, Capt. Hosa Okunbo, over last  Saturday’s fracas at the gate of the palace of the Oba of Benin.

“It is quite saddening, and unfortunate that the Governor and his media aides have taken this development as an opportunity to further blackmail me and deceive the people of Edo state. This is crude politics taken too far!”

“I was surprised to see an online banner bearing my photo and that of our benefactor at the scene of this event. I wish to state categorically that there was never a time we printed or asked anyone to act on our behalf on that issue, we never printed any banner neither did we instruct anyone to print on our behalf, as neither I nor my benefactor is in the contest for Governorship.”

“The truth is that the Governor, wanting to blackmail me and Captain Okunbo, asked his media urchins to print and display the banner in such a way that it seems to represent my stand and that of my benefactor just to score cheap political sympathy.”

“How is it possible for anyone to plan evil and achieve such with his or her real self? I mean how could I plan something of such and also place my photo at the forefront? It is absolutely unreasonable and unwise for any sensible person to do such. I cannot take to such an evil act, as the Governor does not have what it takes to win in Oredo local government.”

“I have been reliably informed that this is a “retaliation” from the Governor due to the factual and expository statement granted by our benefactor Captain Hosa Okunbo that seeks the president and all well-meaning sons and daughters of Edo State to help prevail on Obaseki to let him be. I believe this is another attempt by the Governor to further blackmail the person of Captain Hosa Okunbo.”