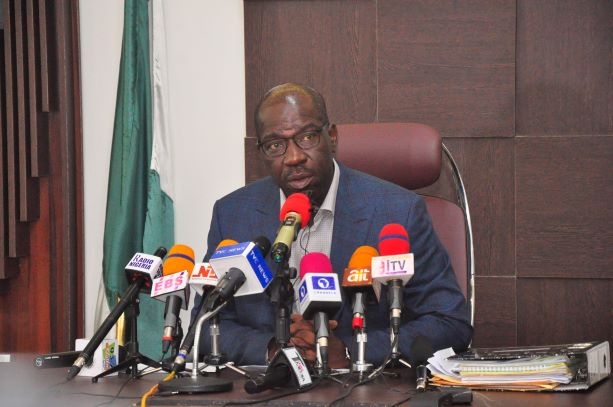 GOVERNOR Godwin Obaseki’s plans to militarize the election are not empty threats, they are exactly the same dubious plots witnessed all over the country since elections in Nigeria have become war and do-or-die. The Governor has repeatedly exposed himself as an authoritarian leader, deploying new anti-democratic politics with democracy spoilers that are yet to be fully comprehended.

The royal solidarity for peaceful poll superintended by the Benin Monarch, Oba Ewuare II and Governor Obaseki’s penchant for violence is one of the dirty tricks that is bound to plague the September 19th, 2020 Edo State Gubernatorial election, if it remains unchecked.

It’s in the light of the foregoing that the Inspector-General of Police invited the Governor a few days ago for probable reprimand to force the Governor to rein in his rabid and ravaging thugs.

Obaseki’s demagoguery and grandstanding on political violence is one of the several tactics tyrannical leaders use to manipulate and undermine democratic systems to stay in power beyond necessary as an aspiring strongmen,  globally. Here are some of the Governor’s catalogue of dirty tricks that has heated up the polity over time.

The first is the weaponization of sentiment. Obaseki, through sheer emotive hypocrisy mounted the now stale narrative that his former political party (APC) that brought him into office wants him to share the state’s resources among the major political actors.

That sentiment sunk into the consciousness of the Edo electorate and has till date accounted for the polarization and social division among the political class, not minding several unchallenged allegations that the Governor purchased the PDP ticket with a whopping sum of (N15) fifteen billion naira from the PDP National Working Committee (NWC), who the Rivers State Governor referred to as “tax collectors”.

With that vague sentiment securely sealed and delivered in his favour; posturing at the same time as the champions of Edo economic greatness, seeking to discredit those who opposed his treacherous “Wake And Sleep” vuantiness further brought  division among the people. The sentiment is strictly about godfatherism.

While the Governor was shouting himself hoarse sanctimoniously against godfatherism in Edo State on one hand, he hurriedly acquired another in Rivers State, in the person of Governor Nyesom Wike on the other hand.

Second, is the Governor’s post-truth politics. Because of unfiltered and direct communication with voters through professional propaganda videos and social media in the absence of traditional news outlets for whatever reasons, the Governor easily dismisses inconvenient facts to enable him escape the wrath of the electorate.

The other day at a campaign turf in Uromi, Governor Obaseki told his audience that he has generated over 5,000 Megawatts of electricity but how to distribute it is the problem! Mr. Obaseki simply exploited the absence of media interrogation. The Governor filled the vacuum with fake news and escaped with unfulfilled electoral promises.

The third trick is that Governor Obaseki has been running against his own government. He has been blaming nameless shadowy, faceless characters behind the curtain and shadowy cabals for a ready excuse for all his woeful failure. He blamed Oshiomhole for upgrading Ekiadolor College of Education to Tayo Akpata University (TAU) as the reason he shutdown the institution permanently since he came to power. Ditto the closure of Colleges of Agriculture Iguoriakhi; Abudu, Afuze, Institute of Continued Education (ICE) and the three School of Nursing in Edo State, under the pretence of renovating the institutions.

The Governor has long been striving on disempowering and running APC voters out of town. Some of them like the former Attorney General of the state, Hon.(Barr) Henry Idahagbon have had their houses bombed or their offices demolished. Such attempt is to tip the electoral scales towards his victory of the  Governor with barefaced hooliganism.

The fifth is the device called “political technology”, a term for dirty tricks as has been visibly and mindlessly deployed by Governor Obaseki’s internet madrassas who manipulated Mr. Tony Kabakar’s old video of 2016 while supporting Governor Obaseki where he threatened fire and brimstone and merging same with Kabakar’s current video on his visit to Pastor Ize-Iyamu in the fake ‘lions and tiggers’ hogwash.

Any right-thinking individuals could see through the amateurish manipulation of that video from the beginning to the ending of the video heist.

Political technology device also has to do with PDP and Obaseki’s alleged plans to hack into the INEC server to manipulate and simply declaring victory before the votes are counted, thereby compromising the process. By reprising manipulative politics, the Governor has been caught in the bid as he has been accused of smuggling dormant political party ‘agents’ names into INEC office so as to compromise the process. Such persons are meant to serve PDP’s interests and that of the Governor’s at polling units, during and after the election.