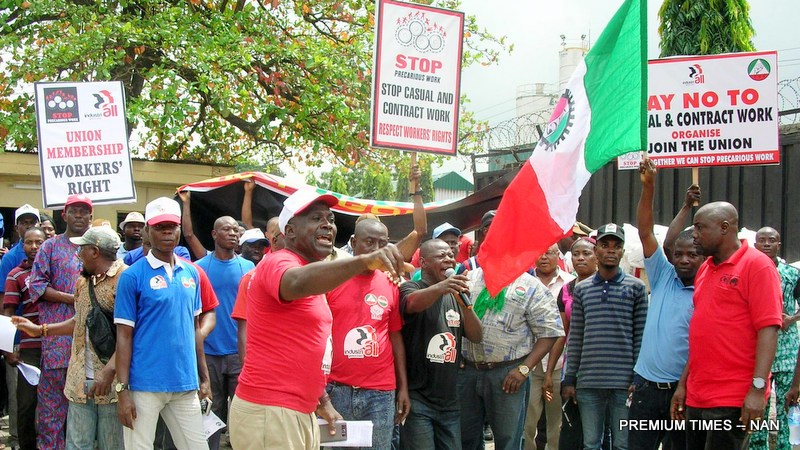 The Nigeria Labour Congress and the Trade Union Congress, have dismissed  the ruling of the National Industrial Court preventing  them from going on with a  proposed Industrial action scheduled to begin  on Monday.

The proposed strike scheduled to  hold  from Monday follows the recent hike in electricity tariffs and fuel pump price.

The industrial court in Abuja, had on Thursday, issued an interim order restraining the unions from embarking on the strike.

The court order was issued by Justice Ibrahim Galadima  following an ex-parte application filed by a group, Peace and Unity Ambassadors Association through their counsel, Sunusi Musa.

Justice Galadima ordered the labour unions, their leadership and affiliate groups to halt the plan to embark on the strike pending the hearing and determination of the motion on notice filed by the applicant.

The judge also granted an order of interim injunction restraining the unions from disrupting, restraining, picketing or preventing the workers or ordinary Nigerians from accessing their offices to carry out their legitimate duties on September 28, 2020 or any other date

It also granted an order compelling the Inspector-General of Police and the Director-General, Department of State Services, to provide protection for workers to go about their legitimate businesses without any form of harassment, intimidation and bullying by the unions, pending the hearing and determination of the motion on notice.

Reacting to the court injunction, the NLC President, Ayuba Wabba, dismissed it, saying he had not been served, saying  that the group that filed the suit was not his employers.

“How does that (injunction) affect me if I have not been served? Have I been served? Are they our employers? What relationship do I have with any group?,” he said.

The meeting between the Federal Government and organised labour meant to avert the planned strike held on Thursdays evening at the Presidential Villa’s Banquet Hall, Abuja, had also ended in deadlock.

Speaking after the meeting, the TUC President, Quadri Olaleye, said  the mobilisation of workers for the strike would not be halted, noting that the government failed to reverse or suspend the fuel price hike and electricity tariff adjustment.

However,  the Minister of Labour and Employment, Chris Ngige, told Journalists after the dialogue said that  parties had a fruitful discussion, adding  that it was shifted till Monday to conclude the discussions

He expressed  optimism that the unions would heed the government’s plea to suspend their planned strike.